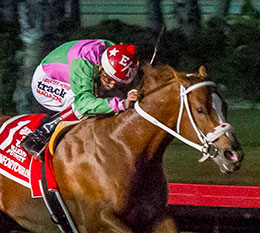 The lineup of trial hopefuls on Saturday is tremendous, as it will be headed by Ed Allreds derby winning brothers Nomadic and Circle City plus Grade 1 stakes winners Runforyourlife and Tell Cartel and Grade 2 stakes winners Inaugurator and Sass Go Blue. This is just a small sample of the outstanding quality of horses that will be on display, as the list will feature eight other runners with career earnings of $100,000 or higher.

The opening trials, which is scheduled as the fourth race on the card, is one of the strongest, as it will feature Governors Cup Derby winner Nomadic, All American Oaks runner-up Kiss Thru Fire and the stakes experienced runners Corona Required, Invader and One Sweet Change. Nomadic, who is trained by Scott Willoughby and will be ridden by Oscar Andrade Jr., has won his last two outings comfortably, including his ¾ length victory in the Governors Cup on July 26. Like his full brother Circle City, Nomadic is a gelding by leading sire Favorite Cartel and out of the stakes winning mare Moonlight Corona.

Gentry Farms Kiss Thru Fire is one of the top fillies in the nation. A two-time Grade 1 futurity finalist last year, the Kentucky-bred daughter of Walk Thru Fire raced in the $404,000 Los Alamitos Oaks and then finished second to the highly-talented Ratification in the $421,000 All American Oaks at Ruidoso Downs in her last start on September 6. Raul Valenzuela will pilot her for trainer Juan Aleman.

The Link Newcomb-owned campaigner traveled to Ruidoso Downs after the Governors Cup, running second in his trial to the All American Derby and then finishing third in the $100,000 All American Invitational Stakes. Dunn Ranchs Southern Wagon was second in the Los Alamitos Oaks and third to Ratification in the $316,000 Rainbow Oaks.

Martha Wells Tell Cartel will be looking to regain his early season form that helped him win the Winter Derby and the Grade 3 El Primero Del Año Derby. Hes finished fourth of lower in last two outings. Allreds Circle City, meanwhile, won his Golden State trial by 1 ¼ lengths and then returned to post a half-length victory in the derby final.

Valeriano Racing Stables LLCs Inaugurator, the winner of the Grade 2 Heritage Place Derby and runner-up in the Grade 1 All American Derby, will highlight the third trial. The Apollitical Jess gelding has won four races and finished second in his other two starts of 2020. He began the year by breaking his maiden at Los Alamitos before going on a torrid streak of outstanding efforts at both Remington Park and Ruidoso Downs.

His rivals in this trial will include Newcombs 2019 Hobbs America Futurity runner-up Sacred Nation, who like his stablemate Cattail Cove ran in last years Two Million final. Other top runners in this heat are Golden State Derby runner-up Long Time Favorite and two-time derby finalist Bono Is Good.

The hits keep on coming in trial number four as 2019 AQHA champion owners Rosenthal Ranch LLC. will be represented by 2019 Grade 1 Golden State Futurity winner Runforyourlife in this trial. The son of Favorite Cartel posted the fastest time to the Grade 2 PCQHRA Breeders Derby when winning his trial by ¾ lengths on September 12, but the connections opted to skip that race in order to point him to the Super Derby trials. Chris ODell will saddle Runforyourlife, wholl be ridden by Eduardo Nicasio.

Wootan Racings Oatman Creek Senator, the winner of the All American Invitational Stakes and third place finisher in the 2019 Grade 1 Ruidoso Futurity, and Steve Burns and Jose Antonio Flores Sass Go Blue, the winner of the Grade 2 PCQHRA Breeders Futurity last year, will also be in action in this trial.

The fifth heat will be headed by Oklahoma Derby runner-up Aint Working and the stakes placed runners Pesky and Favorite Illusion. A Mere Felix, winner of the Pat Hyland Handicap last year, will make his 2020 debut in this trial for trainer Jesus Nunez and owner Ana Silvia Ozul.

The sixth and final trial will offer a terrific showdown between Juan Ramos Dorantes John Carter Cash, who beat older horses in the Bank of America Los Alamitos Championship at 440-yards on August 14, and Cream of The Crop Inc.s Determined One, who ran third in last years Grade 1 All American Futurity. The gelding by Hes Relentless has finished fourth in all three of his 2020 outings, but theyve come in derby trials or stakes caliber races at Ruidoso Downs.