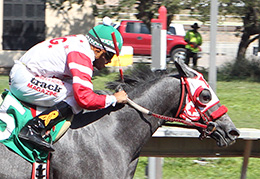 Donelli is coming off of a three-quarter length victory as the fastest qualifier in the 400-yard, $252,000 New Mexico State Fair Derby (RG3) at Albuquerque Downs on September 20. The gray filly has won seven of 11 starts and has earned $402,501, but Tuesdays trial will mark her first career start at Zia Park.

Donelli drew post 4 and will be ridden by Alan Hernandez for trainer Wes Giles in the second of four trials. Her nine opponents in the fourth heat include Victor Lozanos First Neon Moon, a gray son of champion First Moonflash trained by Martin Orona Sr.

First Neon Moon drew post 3 and will be ridden by Mauro Salcedo.

An $11,500 yearling purchase at last years New Mexico-Bred Sale at Ruidoso Downs, Close To Crazy is coming off of Ruidoso summer campaign during which she won the June 14, 350-yard Rita Danley Distaff Stakes (R) and ran second, a neck behind winner Mister Riptide, in the 400-yard, $183,000 Zia Derby (RG2) on July 25.

Close To Crazy drew post 10 and will be ridden by Adrian Ramos in the first trial.