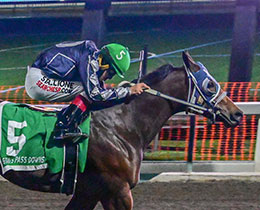 Last Chance Dash Is Main Event In Sunday's 8-Race Card
LOS ALAMITOS, CADECEMBER 20, 2020Eight juveniles will get together for the final stakes event of 2020 in the $15,000 Last Chance Dash at 110 yards on Sunday night at Los Alamitos.

The field is an attractive one headed by Jaime Gomez and Juan Sevillas The Best Feeling, who gave his sire Docs Best Card his first ever stakes winner when he won the $60,000 Far West Futurity on November 9.

The Best Feeling was tremendous in his two starts at Grants Pass, winning his futurity trial there by two lengths before winning the 350-yard final by ¾ lengths. The Best Feeling has always been quick out of the gate so this distance should fit his strengths nicely. Oscar Peinado will ride the Lisa Anderson-bred runner.

Abel Reyes La Reina Del Sur 1 has blazing fast speed as part of her arsenal and should be a top contender here as well. She finished ahead of the talented Monopolist in the California Breeders Freshman Stakes on July 25 but had a troubled trip when fifth in the Corona Chick Handicap in her last start.

Adan Farias, a winner 1,085 Quarter Horse races in his career at Los Alamitos, is back training at the Orange County oval with his first starter being La Reina Del Sur 1.

After being away from the track since November of 2011, Farias will begin here with a small stable of runners while being one of the most prominent new names in the barn area for this upcoming season.

His barn will eventually include several yearlings that he purchased on behalf of his clients at the Los Alamitos Equine Sale last October. Juan Pablo Leon, who rode La Reina Del Sur 1 to victory in the California Breeders Freshman Stakes, will be back aboard the Favorite Cartel filly in the Last Chance Dash.

Single Brad, a three-time winner and Governors Cup Futurity finalist, plus Cartels Legacy, who also made the Governors Cup field, are among the other top contenders in this event.