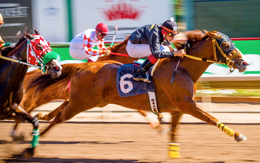 J Boy A will be making his first official start since October 24, when the gelding ran third, two lengths behind winner Holy Storm, in the 870-yard, $35,000 Sandia Stakes at Albuquerque Downs. J Boy A drew post 2 and will be ridden by Alfredo Juarez Jr.

Other contenders in the first division include Erica Carreons Nicos First Cartel, a graded stakes placed 5-year-old First Prize Perry gelding trained by Gaston Valenzuela. Nicos First Cartel is coming off of a 2020 campaign during which he finished second, 1 1/2 lengths behind winner Madewell, in the 870-yard, $55,000 AQHA Albuquerque Distance Challenge (G3).

Nicos First Cartel drew post 3 and will be ridden by Miguel Perez.

The first division of the Turf Paradise 870 Challenge is headed by Brenda Figueroas Leedslimit (TB), a 5-year-old son of Tannersmyman trained by Juan Figueroa. Leedslimit has won two races since he was claimed by his current owner for $2,500 at Los Alamitos on September 6.

Leedslimit drew post 3 and will be ridden by Michael Ybarra.

All Turf Paradise races can be seen at Q-RacingVideo.com.