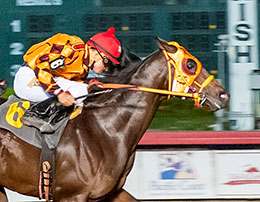 Senor Frogs will be shortening in distance off of his nose victory in the 440-yard, $40,000 Casino at The Downs Stakes at Albuquerque Downs on October 24. The bay gelding drew the rail post and will be ridden by Hector Aldrete for trainer Eloy Navarro.

Other contenders in the second division include Jess Find Me, a 4-year-old Mr Jess Perry mare owned and trained by Havid G. Canez. Jess Find Me is coming off of a sophomore campaign during which she earned $17,245 from four outs and was a finalist in the 440-yard, $316,000 Rainbow Oaks Stakes at Ruidoso Downs.

Jess Find Me drew post 7 and will be ridden by Emilio Tapia.

The second division of the Wayne Brasher Memorial is headed by Ricardo M. Ramirezs AJs On Time, a 3-year-old son of world champion Apollitical Jess trained by Jesus Olivas-Valenzuela. AJs On Time has won two of six races and has banked $69,213, and he ran second, a nose behind winner Speed Dynasty, in the September 20, $256,000 La Fiesta Futurity at Albuquerque Downs.

AJs On Time drew post 5 and will be ridden by Jacobo Enriquez-Navarro.

All Turf Paradise races can be seen at Q-RacingVideo.com.