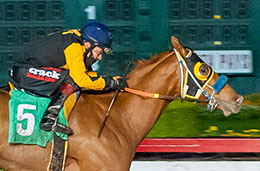 Streelman's first win in the Winter Derby came with the 11-1 longshot Imaqtpie in 2017 when the filly upset a strong field that included stakes winners One Proud Eagle, Bannister, Kiddy Up Cowgirl, Staggering Strides and Jess Hawk.

This time, Flash Bak is the one to beat and with good reason. The Moonin The Eagle gelding was outstanding in his Winter Derby trial victory, finishing strongly while racing from the middle of the track to score a ¾ length win in the fastest qualifying time of :20.026 over a track labeled wet fast.

"This horse loves distance," trainer Jaime Gomez said. "When it comes to distance, he's one of the best horses out there. We knew we had a special horse when we sent him to Ruidoso Downs.

Flash Bak's strong trial effort in his 3-year-old debut followed a remarkable juvenile campaign in which he was one of only two runners to qualify to both the All American Futurity at Ruidoso Downs, which is Quarter Horse racing's richest race, and the Los Alamitos Two Million Futurity, which was California's richest race of 2020. Flash Bak ran a tremendous race in the Two Million, crossing the wire second only behind the PCQHRA champion 2-year-old filly Apollitical Patty.

The list of top contenders in this race is headed by Ed Allred's PCQHRA Breeders Futurity winner Monopolist and Rick Sumner's Holiday Handicap winner Candy Blood. The two talented geldings met in the Winter Derby trials in a race that was a tale of two halves.

Candy Blood, a son of last year's leading second-crop sire Apollitical Blood, dominated the opening 200 yards of that race, leading by ¾ lengths in a way that was reminiscent to his Holiday romp on December 26. The second half, however, was all Monopolist, as the son of Favorite Cartel came flying after Candy Blood and caught him right around 250 yards and then pulled away like a flash in route to an impressive length victory for jockey Oscar Andrade, Jr. and trainer James Glenn, Jr.

"Oscar said (Candy Blood) was gone but as soon as Monopolist caught his stride, he knew he had the horse underneath him to catch him. He has a heck of a finishing gear," Glenn, Jr. said.

Howard Nichols' Tres Seis gelding Doc Lamb, who was fifth in the Two Million, and the ultra-quick Leah Carroll, a Hes Relentless filly who won the Last Chance Dash Handicap at 110 yards for Paul Jones, are among the other noteworthy runners in the Winter Derby.

Gentleman Chuck, AP A Special Takeoff and Twostrikesurprise will complete the field to the nation's first Grade 1 derby of 2021.