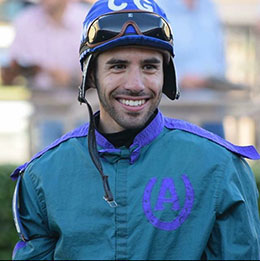 The airplane was located about 7 a.m. Monday between Hydro and Hinton near Caddo County roads E 1080 and N 2535. Both people aboard the airplane were pronounced dead at the scene, the patrol reports.

FAA spokesman Lynn Lunsford said the airplane is a Beechcraft Bonanza that apparently crashed about 10 p.m. Sunday. The airplane was going to El Reno, but was reported missing after air traffic controllers lost radio and radar contact with the aircraft. FAA investigators are on their way to the crash site, and the National Transportation Safety Board has been notified. The NTSB will be in charge of the investigation and all updates. 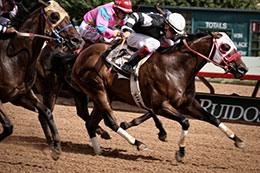 Jockey Cesar Gomez rode Rock You to victory in the Grade 1 All American Gold Cup at Ruidoso Downs.
© Cristian Molina / StallioneSearch
Gomez was returning to Oklahoma City from West Texas at the time of the crash.

The jockey's biggest ridding year was 2015 when he banked over $2 million earnings aboard such stakes horses as One Fabulous Eagle, Rock You, Bye Bye Freightrain and The Fiscal Cliff.

He won the 2015 Grade 1 All American Gold Up and was second in the $3 million All American Futurity(G1). Last year he rode Dauns First Desirio to victory in the Grade 2AQHA Challenge Championship Derby at Prairie Meadows.

Funeral arrangements will be posted on StallioneSearch.com when they become available.