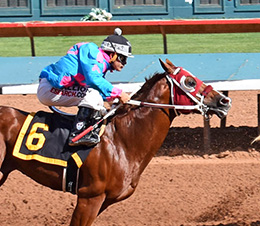 A horse owner and a trainer from Texas filed a lawsuit claiming officials in New Mexico are failing to follow their own policies and regulations in overseeing the state's multimillion-dollar racing industry.

Debra Gotovac and Brad Bolen filed the case in U.S. District Court, alleging their rights to due process were violated when the executive director of the New Mexico Racing Commission allowed horses belonging to a trainer suspended on suspicion of illegal drugging to compete under other trainers.

The plaintiffs say they missed an opportunity to compete in the upcoming All American Futurity because the transferred horses were allowed to run in recent qualifying trials for the prestigious race.

The complaint filed Tuesday came as concerns swirl around the handling of drug testing, certification of track stewards and a shake-up that saw one commissioner ousted after she spoke out regarding changes in the way horses are tested for certain medications.

Gotovac and Bolen allege the commission "has engaged in a pattern and practice of violating procedural protections."

Attorneys representing other horse owners and trainers say they also are considering legal action over the commission's interpretation of the policies and laws that govern the industry.

Oversight of horse racing has been in the spotlight due to a string of horse deaths at Santa Anita Park in California. That sparked a flurry of abrupt changes in medication and safety rules throughout the industry.

Congress is considering legislation that would create a private, independent authority to develop and administer a nationwide anti-doping and medication control program for the sport.

In New Mexico, the commission is wading through numerous appeals after some owners and trainers complained they should have been given a grace period to adjust their medications once the state contracted with a new lab to handle urine and blood samples as part of New Mexico's testing regime.

After the change last year, more positive results for corticosteroids began turning up. The medications are used to treat swelling and joint pain, which critics argue could lead to horses being run more than they should be.

Susan Vescovo, a former member of the commission's medication panel, has long expressed concerns over whether the commission was in line with national standards. Testing for corticosteroids before the 2018 change rarely turned up positive results, she said.

Vescovo resigned in July, saying in a letter to the commission that she was concerned that regulators have not accepted responsibility for what she described as wrongdoing.

"The assurances given to the horsemen by (the commission) and its representatives were incorrect and misleading," she wrote. "The horsemen reasonably relied upon those assurances to their detriment."

Vescovo said in an interview that owners want testing and enforcement of laws and regulations to be carried out to ensure fairness and accountability within the industry.

The federal lawsuit involves the Aug. 9 suspension of trainer Trey Wood following a positive result for albuterol in a horse that finished first in a July 27 race at Ruidoso Downs.

The initial ruling cited regulations that prohibit all horses owned, trained or under the care of the trainer to be ineligible to start in any race. The ruling also referenced regulations that govern the transfer or sale of such horses.

A signature event at Ruidoso Downs, the $3 million All American Futurity has become the richest race for 2-year-old horses of any breed in North America.

Attorney Blair Dunn, who represents Gotovac and Bolen, said his clients were denied an opportunity at potential purse money and increased value associated with horses that run in such a race.

"It all stems from the failure of the New Mexico Racing Commission to follow its own rules," Dunn said.