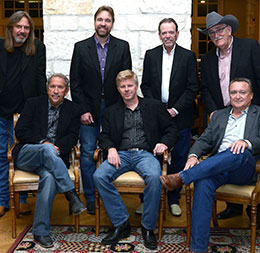 "This promises to be a very special edition of the Symposium because we're going to salute 30 years of conducting this unique festival," Ruidoso Downs' president and general manager Jeff True said. "We have some uniquely exciting concerts and events planned. This is a most memorable weekend for everyone."

This year's Cowboy Symposium starts on Thursday evening, October 10th, with Bob Wills' Texas Playboys under the direction of Jason Roberts along with Dave Alexander and the Texas Swing Band. The Playboys were the first band to play at the Cowboy Symposium's inaugural show in 1990.

The award winning Asleep at the Wheel is considered the pinnacle band for the western swing music genre. The band has been featured at the Cowboy Symposium more times than any other major performance band over 30 years. The Quebe Sisters are considered the top female current western swing band in the country.

The annual $13,000 Chuckwagon Cookoff presented by Albertson's Market is scheduled to be held in the race track infield where nearly 20 authentic chuck wagons are expected to compete in various categories.

The symposium remains one of the largest annual cowboy gatherings in the west each year and includes many demonstrations and family activities including a kid's rodeo on Saturday morning.

VIP and general admission can be purchased through the Ruidoso Downs Race Track box office, online at cowboysymposium.org or telephone the box office at 575-378-4140.