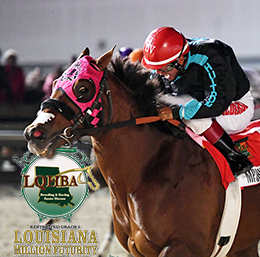 There are 130 accredited Louisiana-breds entered across the 14 trials and 2017 AQHA World Champion trainer Kenneth Roberts, Sr., who won the 2017 LQHBA Louisiana Million with You Drive I Fly, leads the way with 12 horses entered.

The most prominent of those entrants is Lee Berwick Futurity(RG1) winner Runaway Second Down. Trainer Robi Meche will saddled the son of multiple stakes sire Sir Runaway Dash for owners Eulalio Argote and Victor Alvarado. Raul Ramirez, Jr. has been named rode the earner of $363,526 from post 5 in the 13th trial. The gelding is (6) 2-1-1 and finished second by a head inan Allowance at Evangeline Downs on October 19.

Tdz Jet Black Down, who won the 2019 Laddie Futurity (G2) at Delta Downs on May 18, will race the 12th trial. The Jet Black Patriot gelding is the 9-5 morning-line favorite under jockey John Hamilton.

There are three other Louisiana Futurity winners from 2019 also entered in the LQHBA Louisiana Million trials. Tf Shez Jess Dashin, winner of the 2019 Lassie Futurity (G2) at Delta Downs on May 17, is the 9-5 morning-line favorite in the very first trial of the evening. Everardo Rodriguez, the current leading rider at Evangeline Downs, will be aboard the Sir Runaway Dash filly for trainer Ned Goutierrez III.

Hh Gailforce, winner of the Mardi Gras Futurity (G2) at Louisiana Downs on March 16, is the 3-1 morning-line favorite in the third trial on Friday night. Luis Ruiz is scheduled to be aboard the Freighttrain B filly for trainer Joel Cantu.

Sir Runaway Cash, winner of the LQHBA Sale Futurity (G1) at Fair Grounds on September 7, has been installed as the 9-5 morning-line favorite in the 10th trial on the program. John Hamilton will be in the saddle for trainer David Bustamante on the Sir Runaway Dash gelding.

With the addition of five extra races to the normal nine-race program at Evangeline Downs, the post time on Friday, November 15 has been adjusted to 4:50 pm Central Time.

For more information on the American Quarter Horse season at Evangeline Downs, visit the track's website at evdracing.com. Evangeline Downs' Twitter handle is @EVDRacing and the racetrack is also accessible on Facebook at www.facebook.com/EvangelineDownsRacing.