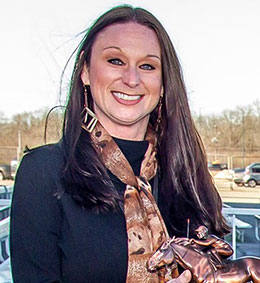 Sokol has been employed at Louisiana Downs since 2007, joining the racing office in 2012. She most recently served as racing office manager.

Her new duties will include supervision of the racing staff as well as overseeing handicapping seminars, racing promotions and other duties associated with the live Quarter Horse and Thoroughbred race meets.

"Jen Sokol has been a hard-working team member at Harrah's Louisiana Downs and has served the racing office in many capacities," said Heitzmann. "She has done a tremendous job for us and is very deserving of this promotion."

Chaplain Jimmy Sistrunk adds his appreciation for the time and energy that Sokol has devoted to assisting horsemen and the backside employees.

"Jen is always eager to get involved and has been so helpful in assisting our chaplaincy in fundraising efforts," he said. "She goes above and beyond as has done so much, especially in our annual Golf Tournament and Backstretch Benevolence Fund Banquet."

Sokol's duties are effective February 14 and the native of Greenwood, Louisiana looks forward to her new role.

"Working with the horsemen and entire team at Harrah's Louisiana Downs has been a very rewarding experience," said Sokol. "Most people have no idea how much coordination is involved each day in organizing race cards and the charitable work we do, but I love it and am thrilled to continue my career with this great organization."

The feature honors the legacy of Mr Jess Perry, the acclaimed racehorse and stallion who passed away in November, 2017 at the age of 25. Bred by Jesse Perry, the father of noted Louisiana breeder and LQHBA Executive Director Emeritus Leverne Perry, Mr Jess Perry was voted 1994 AQHA Racing Champion 2-Year-Old and Champion 2-Year-Old Colt, winning 12 of his 21 career starts, including the 1994 LQHBA Breeders Futurity. He became one of the states top stallions, with graded stakes winning progeny including Apollitical Jess, One Famous Eagle, Noconi, Matabari, Miss Racy Jess, and Fredricksburg.

The first division of the Mr Jess Perry, which will run as race four, boasts two stakes winners from Louisiana Champions Day, which took place on December 14 at Fair Grounds. Tuckers Prize, owned and trained by Preston Jourdan, won the $100,000 Louisiana Champions Derby under Damian Martinez. It was the fourth win in a row for the son of Fast Prize Dash, who will make his first start as a 4-year-old on Saturday.

The highest earner in both divisions of the Mr Jess Perry is Saul Dorados Lightemupwithcharm.

Bred by Jumonville Farms, the 6-year-old son of Sizzlin Cartel, has won seven of his 25 starts with three graded stakes and earnings of $279,520 to date. His most recent victory was the $100,000 Louisiana Champions Day Classic (G2) on December 14 at Fair Grounds. Dismissed by the betting public at odds of 19-1, he closed with a late rush to win the 440-yard stakes. Trainer Miguel Rodriguez will give a leg up to jockey Noe Castaneda and looks for a solid effort on Saturday afternoon.

He is a very sound horse and came out of the Fair Grounds race in great shape, said Rodriguez. We gave him one light work and I believe he can win at 350 yards; the key is the break now that he is shortening from 440. However, there is pretty tough company in this race!

In addition to Tuckers Prize, The Cazador, a multiple stakes winner who captured the 2018 Mardi Gras Derby here for owner Rayne Knight and trainer Mike Zingelmann, drew into this flight. Regular pilot John Hamilton has the return call aboard the 5-year-old son of Sir Runaway Dash.

In the second division, Myron McKinnons Dlj Imma B Famous is the even-money choice in the seven horse field. The 7-year-old gelding by Coronas Leaving You is trained by Eduardo Morales and will make his second start of the meet under current Louisiana Downs leading rider Ricardo Hernandez, Jr. He ran second in the $15,000 Swift Stakes here on January 25 following his runner up finish behind Lightemupwithcharm in the the $100,000 Louisiana Champions Day Classic at Fair Grounds. The bay gelding has banked $154,525 in 19 lifetime efforts.

Other notables include Follow My Wagon, who was the upset winner in the $137,020 Evangeline Downs Derby on December 14. Luis Vivanco will ride the 4-year-old son of Jls Party Wagon for owner Julio C. Rodriguez. Rogers Farms Rf Fast Dash N Blue won an allowance here on January 13 and will be in pursuit of his sixth career victory. The 4-year-old gelding by Jess Louisiana Blue is trained by Vann Haywood and will be ridden by Gilbert Ortiz.

Here are the fields for the Mr Jess Perry-Division 1 (race 4), in post-position order including jockey assignments and morning-line odds:

Here are the fields for the Mr Jess Perry-Division 2 (race 6), in post-position order including jockey assignments and morning-line odds:

Its been a solid showing for jockey Ricardo Hernandez, Jr. who tops his fellow riders with 21 trips to the winners circle. Three riders are tied for second-place with 13 wins each: John Hamilton, Bryan Candanosa and David Alvarez.

The battle for leading owner is very competitive with J. and J. Stables LLC and Barbara Hieden Seber tied with five wins each. There is also a tie for second-place between Rosendo Valdez, Jose Ortiz and Juan Antonio Carrillo, Sr. They have each won four starts this meet.

Louisiana Downs ran six schooling races on Friday, February 7 for juveniles nominated to the $75,000-added Harrahs Entertainment Futurity (G3). The complete recap on each of the 220-yard heats has been posted by Stallionesearch.com on this link. The trials for the Harrahs Entertainment Futurity will take place on March 1with the ten fastest qualifiers returning for the final on Wednesday, March 18.

Harrahs Louisiana Downs is hosting an exciting on-track handicapping contest called the Road to Kentucky Handicapping Contest. It began on Saturday, January 18 with major stakes races, including key Kentucky Derby prep races featured each week through May 2. Fans can register at the contest table adjacent to the program stand with weekly prizes awarded and points accumulated toward the $1,000 grand prize.

Located near Shreveport in Bossier City, Louisiana, Louisiana Downs opened in 1974 and was purchased by Caesars Entertainment in December, 2002. With annual Thoroughbred and Quarter Horse racing seasons, the track is committed to presenting the highest quality racing programs paired with its 150,000 square foot entertainment complex offering casino gambling, dining and plasma screen televisions for sports and simulcast racing.