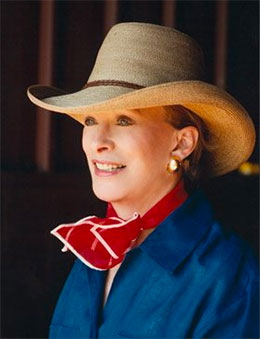 She was an American rancher, horse breeder, business executive, philanthropist, and art collector from Fort Worth, Texas. She served as the President of Burnett Ranches and the Chairman of the Burnett Oil Company.

Marion was inducted into the American Quarter Horse Hall of Fame In 2007.

Former President George W. Bush said in a statement today that he and former first lady Laura Bush were mourning the death of their friend. He said she was a true Texan, a great patron of the arts, a generous member of our community, and a person of elegance and strength.

The only child of Anne Miss Anne" Burnett Tandy, Marion was raised in Fort Worth, Texas, to be a strong businesswoman who appreciated the arts and loved the ranch that would someday be hers. She spent her summers on the Four Sixes Ranch in Guthrie, Texas, established in 1870 by her great-grandfather Samuel Burk Burnett.

At a young age, she earned the respect of the cowboys as she learned to ride horses and do the things they did. Her strong will and determination made her a fine leader, both in the ranching industry and the business world.

A group of horsemen discussed the idea of forming an association for Steel Dust and Billy horses in her parents', Miss Anne and husband James G. Hall, home in Fort Worth in the early 1940s. From that discussion, the American Quarter Horse Association was formed. Jim Hall was the Associations first treasurer. When Marions mother died in 1980, she took the reins of the vast Burnett ranches. She also inherited a legacy linked to the American Quarter Horse Association.

Marion inherited four ranches spanning 275,000 acres in West Texas and served as the president of the entity known as Burnett Ranches. Not since Capt. Burnett founded and built the Four Sixes Ranch more than a century ago has any family member taken as much interest in the ranches as she, according to former, long-time ranch manager, the late J.J. Gibson.

Anne was a very capable leader who looked to the future and changed with the times, said Dr. Glenn Blodgett, veterinarian and Four Sixes Horse Division Manager. She surrounded herself with loyal, dedicated employees who shared her vision for perfection. Anne oversaw and directed the ranching and horse operation to a new level.

In 1993, Marion brought racing back to the Four Sixes by purchasing racing champion Dash For Cash and by securing Special Effort and Streakin Six for stud duty. The ranch was expanded to include a deluxe mare hotel, a facility that houses 160 visiting broodmares. AQHA honored the Four Sixes/Burnett ranches as the 1993 Best Remuda Award winner. For 50 consecutive years of breeding Quarter Horses, the Association also bestowed the inaugural Legacy Award on the ranch in 1997. Marion donated the life-size bronze of Dash For Cash to the American Quarter Horse Hall of Fame & Museum in 1995.

The most important thing that ever happened to me was growing up on that ranch, Marion said. It kept my feet on the ground, more than anything else.

Her other honors also include the Golden Deed Honoree as selected by the Fort Worth Exchange Club, 1993; The Charles Goodnight Award, 1993; inducted into the Texas Business Hall of Fame, 1996; the Governors Award for Excellence in the Arts award, 1996; the American Quarter Horse Foundations Merle Wood Humanitarian Award, 1999; the National Golden Spur Award, 2001; the Boss of the Plains Award from the National Ranching Heritage Center, 2003; and inducted into the Texas Cowboy Hall of Fame, 2014.

Cody Hartley, director of the O'Keeffe museum, said in a statement that Marion died Tuesday in California. He called her a passionate arts patron, determined leader, and generous philanthropist.

Marion and her husband, John Marion, established the museum in 1997. She served as the chair of the board of trustees until 2016.

While her civic and cultural activities extended throughout Texas and the United States, her deepest commitment was to her birthright and the continuing success of the historic Four Sixes Ranch, which will be recognized in the April-May 2020 issue of The American Quarter Horse Journal for 80 years of breeding American Quarter Horses.

Funeral arrangements and an official obituary will be shared on StallioneSerch.com when the information is available.