Home > News>After a Spinal Cord Injury, Being a Mentor for Other Patients

 After a Spinal Cord Injury, Being a Mentor for Other Patients
Jockey Vinnie Bednar, 28, was injured in a one-horse spill at Los Alamitos Race Course on August 22, 2020.

After a Spinal Cord Injury, Being a Mentor for Other Patients
Reprinted Courtesy Craig Hospital

ENGLEWOOD, COFEBRUARY 18, 2021When Vincent "Vinnie" Bednar arrived at Craig Hospital from California for spinal cord injury (SCI) rehabilitation, he didn't feel like talking to anyone. As a 28-year-old professional athlete facing this life-changing injury, Vinnie just wanted to keep to himself.

Two months later, Vinnie is thriving and became a go-to peer mentor ready to chat with any patient looking for support.

"I loved everybody at Craig," Vinnie says, "and I've made a lot of lifelong friends."

Vinnie's emotional evolution during his time at Craig wasn't easy, but he quickly discovered that his support system was even greater than he knew. His girlfriend, Nora, went above and beyond to uplift him when he was feeling lost, and he had his Orange County community calling him so much that his phone would be dead by the afternoon. 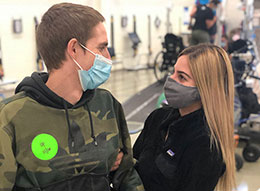 Vinnie Bednar at Craig Hospital with girlfriend.
© Craig Hospital
A turning point for Vinnie was when he realized that he also had an incredible support system in the Craig staff. From the nurses to the therapists on his team, Vinnie says that they were "above and beyond supportivelike a new family." And once he connected with the Craig Peer Mentor Program, Vinnie's perspective shifted and he knew that he wanted to embrace a positive outlook on life and be an emotional support for other Craig patients.

Vinnie even went so far as to help set up group gatherings with patients on the weekends where they could be socially distanced and play games on their phones. Initially kicked off by another Craig inpatient, Erik Bedwell, Vinnie helped knock on patient doors to encourage people to participate. The opportunity to spend time together and get to know each other, especially in the middle of a pandemic, meant a lot to Vinnie and the other patients. 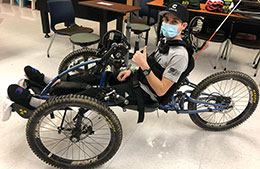 Vinnie Bednar at Craig Hospital using recumbent bike. © Craig Hospital
When not building community with other patients, Vinnie was making significant progress in his SCI rehabilitation program. Vinnie was a jockey before his injury and had been racing horses for more than ten years, so he brought an athlete's mentality to his rehabilitation and focused on reaching new milestones every day. Vinnie improved so quickly that he only needed to be at Craig for a little over two months and was discharged in late November 2020. Even though he was eager to return home, Vinnie says he shed a few tears when leaving.

Now back in California, Vinnie keeps pushing himself to learn more. He wakes up every day hoping to make things easier for the people helping him. 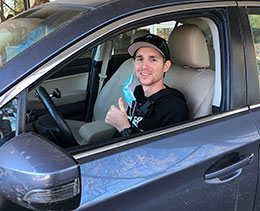 Vinnie Bednar driving. © Craig Hospital
"There isn't something that I can't do," Vinnie says, "it's just going to look a little different."

Outside of Craig, where everything isn't as fully accessible, there's always something new to learn, like how to get clothes out of the top dryer. Vinnie loves being a problem-solver, so he's determined to figure it out.

While he can't return to his previous job as a jockey, Vinnie definitely wants to get back into the industry. He's not sure what's in store for him in 2021, but "I'm stoked to see what the future holds," he says. So are we!