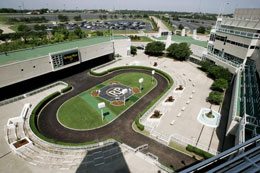 Remington Park will now begin live racing on Sunday, March 7 and continue an opening three-date schedule through Tuesday, March 9. The post times for all three dates are to be determined.

The Remington Park season opening weekend was originally set to begin on Thursday, March 4 and continue through Sunday, March 7. However, extremely cold winter weather and snow accumulation of more than 10 inches this week have pushed the start of the season back a few days.

Horses have been unable to go to the Remington Park racing surface to train since Monday, Feb. 8. Oklahoma temperatures fell below the freezing mark that same morning and have yet to rebound above 32-degrees. Temperatures are not forecast to rise above freezing until midday Saturday, Feb. 20. Remington Park has yet to conduct any preseason training races. These events are vital for the abundance of 2-year-old horses set to make their racing debuts in trial competition for lucrative futurities.

The Oklahoma Derby trials and Oklahoma Paint & Appaloosa Futurity trials will be conducted on the new first day of the season, Sunday March 7. Trials for the historic 80th running of the Oklahoma Futurity are set for Monday, March 8. The initial stakes races of the season, the $68,000 Mighty Deck Three Stakes (restricted Grade 2 for Oklahoma-breds) at 250 yards, and the Grade 3 SLM Big Daddy Stakes at 550 yards, will be contested on Tuesday, March 9 along with other overnight races.

Remington Park will resume its normal Thursday through Sunday weekly schedule on March 11.

The adjusted season-opening schedule was developed with the cooperation of Remington Park, the Oklahoma Quarter Horse Racing Association and the Oklahoma Horse Racing Commission. The change in dates will allow horsemen to maximize the available time to prepare their athletes for competition.

Tracked by more than 164,000 fans on Facebook and more than 10,400 Twitter followers, Remington Park has provided more than $254 Million to the State of Oklahoma general education fund since the opening of the casino in 2005. Located at the junction of Interstates 35 & 44, in the heart of the Oklahoma City Adventure District, Remington Park will host the 2020 American Quarter Horse, Paint and Appaloosa Season from March 6 through May 30. For more information, reservations and group bookings please call (405) 424-1000, 866-456-9880 or visit remingtonpark.com.