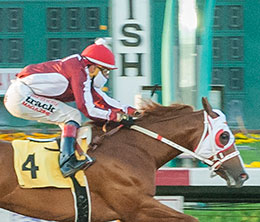 Fourteen juveniles will compete in the trials with the horses with the 10 fastest times moving on to the 350-yard California regional final on Saturday, August 15.

The list of top horses in the trials is led by Dan Moons Jet Wings One, the runner-up to the outstanding filly La Jaconde in the Grade 2 Robert Adair Kindergarten Futurity.

In finishing second in the Kindergarten, Jet Wings One finished ahead of Freshman Stakes winner La Reina Del Sur 1 and Kindergarten finalist Hi High Hopes. Jet Wings One is also the winner of one of the strongest maiden races of the season.

Gentry Farms College Scandal, a Coronas Leaving You filly out of Grade 1 stakes winner Fovee, is another top name in the trials.