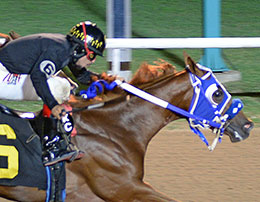 TULSA, OKJULY 21, 2020Relentlessly, a graded stakes placed son of Hes Relentless, and fastest qualifier High Value Of Return, are among the 10 2-year-olds entered back in Saturdays 350-yard, $139,900 Speedhorse Futurity (G3) at Fair Meadows at Tulsa.

Relentlessly has earned $76,963 from four starts, and his resume includes a second-place finish, one length behind winner Aint She Tempting, in the 300-yard, $384,000 Oklahoma Futurity (G2) at Remington Park on March 21. The colt drew post 5 and will be ridden by Edwin Escobedo for owner Aguila Negra Racing Inc. and trainer Jose Huerta.

High Value Of Return made his local debut with a neck victory in the eighth of nine Speedhorse Futurity trials on July 10. Trained by Fidencio Jimenez for owner Mark McPhail, the homebred High Rate Of Return gelding drew post 9 and will be ridden by Kevin Camacho.

Also on Saturday, Lloyd Garrisons Captain Capi, a homebred stakes-winning son of Capo de Capi, heads a field of 10 entered back in the 350-yard, $70,200 Speedhorse Paint & Appaloosa Futurity (G1). The fastest qualifier, Captain Capi set the fastest qualifying time with his 2 1/4-length win in the fourth of five trials on July 11. The gelding has won three of four outs and has banked $77,012. Captain Capi drew post 4 and will be ridden by Rolando Raudales for trainer Dee Keener.

The Speedhorse Derby and Speedhorse Paint and Appaloosa Championship Futurity, which were originally scheduled to be run on Saturday, have been rescheduled. The trials for these races will be run at Will Rogers Downs on October 24 and will be followed by the finals for both stakes on November 4.

All Fair Meadows at Tulsa races can be seen at Q-RacingVideo.com.