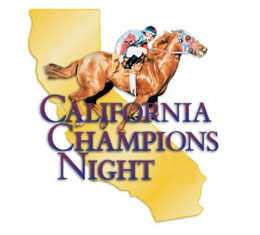 First post for Saturdays eight-race program is expected to be at 7:30 p.m.  about 30 minutes after the final race at Del Mar. The Governors Cup Futurity at 350 yards is one of four Quarter Horse stakes events on Saturday. The other stakes races on tap are the $25,000 Sprint Stakes, which will feature an outstanding matchup between two-time Grade 1 winner Tequila Sangria and the razor-sharp stakes winner Alamode.

The Sophomore Claiming Stakes will have eight horses in action squaring off for a $17,500 purse.

J. Francisco Diazs Check My Cartel is one of the top names in this Claiming Stakes after winning three times since last November and finishing in the money in each of his last three outings. Horses in this race can be claimed for $10,000 each.

The marquee race on Saturday is the Governors Cup Futurity led by Haras Portofinos Untuckit, who posted the fastest qualifying time of :17.71 when winning his trial by ¾ lengths on July 11.

Eduardo Nicasio, who is now the third leading rider in California Champions history with 14 wins, will be aboard the Favorite Cartel gelding for trainer Chris ODell. Purchased for $50,000 at the Los Alamitos Equine Sale, the Dr. Steve Burns-bred Untuckit will start from post number three and enters the final in sharp form after finished in the money in each of his last three starts.

His list of competitors is headed by Rancho El Cabrestos Favorite Five, a $110,000 purchase also at the Los Alamitos Equine Sale. The Juan Aleman-trained colt, who ran second to Untuckit in the trials, is by leading stallion Favorite Cartel and out of the Grade 1 stakes winning mare Five Bar Molly, who also produced the AQHA champion colt Five Bar Cartel. Favorite Five will start from post number two  just inside of Untuckit in the final.

The closest trial on July 11 was the second heat in which Jeff and Michelle Cravens Favorite Colossus finished a nose ahead of Cartels Legacy and Squid Word. All three qualified to this race from that trial and should be just as tough with the big money on the line.

Ed Allreds Single Brad, who posted one of the meets fastest winning times by a 2-year-old at 300 yards when covering the distance in :15.44 back on May 23, returned with a solid second place finish to M & G Farms, Incs Constituent in the trials. The Valentin Zamudio-trained Constituent bumped at the start but was outstanding from there on the way to winning his trial over Single Brad by a neck.

Bella Valenzuelas Opt Out, who finished strongly to win his trial, will look for his third win in four starts when starts from post number eight in the Governors Cup Futurity final. The field will also feature Grade 1 Ed Burke Million Futurity finalist BF Outfoosed, and J. Francisco Diazs Checkn Favorite, who is still a maiden while finishing in the money in all three of her starts.