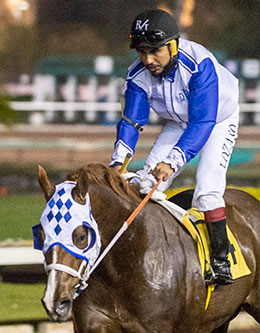 Tell Cartel Among 18 Sophomores In Trials To Golden State Derby On Sunday Night
LOS ALAMITOS, CAJULY 30, 2020Mimi Wells homebred star Tell Cartel will begin his quest for a third derby victory of the season when he heads a tremendous group of sophomores in the trials to the Grade 2, $204,100 Golden State Derby on Sunday at Los Alamitos.

A pair of trials are on tap at 400 yards with nine horses scheduled to race in each heat. The horses with the 10 fastest times will advance to the Golden State Derby final on Sunday, August 16.

Tell Cartel has been the meets top 3-year-old after scoring a 3/4 length win in the Grade 1 Los Alamitos Winter Derby on February 8 before winning by a ton in the Grade 3 El Primero Del Año Derby on March 29. Second at the start of the El Primero, he took off at the halfway point of the race to score a 1-¾ length win while well in hand. Ruben Lozano, who has ridden Tell Cartel to perfection in both of those derby wins, will be aboard the Favorite Cartel colt in the second trial for trainer Matt Fales.

Tell Cartel has won six of 13 career starts, while finishing in the money in 10 of those races.

Dr. Steve Burns was the AQHA champion breeder in 2019 and currently campaigns one of the strongest groups of 3-year-olds in the nation. A couple of those runners will be in action in the Golden State Derby led by the highly talented sprinters You Can Run and Grade 2 PCQHRA Breeders Futurity winner Sass Go Blue.

Bred by Lucky Seven Ranch, Sass Go Blue is out of the champion aged mare Sass Me Blue. Lucky Seven will send out a top homebred of its own in Sass Mo Blue, the winner of the Los Alamitos Maiden Stakes earlier this year. He is the half-brother of Sass Go Blue. Other top sophomores in the trials include Ed Allreds Circle City, the 2019 Grade 1 Golden State Million runner-up, and Fernando Flores Mister Tornado, the winner of the Adequan California Derby.