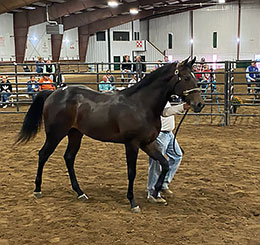 Bode also purchased the second high-seller, Hip 28 Liaison On Fire for $20,000 from the Gunder consignment. The Sixes Liaison colt is out of AQHA Racing champion mare Blazin ($317,612) by This Snow Is Royal. Liaison On Fire is a half-sibling to six blacktype.