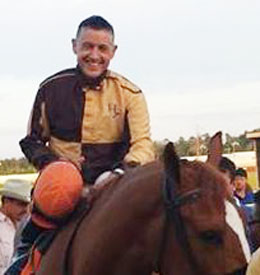 Veteran rider Eddie Cox sustained a second spill and fracture in his vertebra in less than six months on Friday night's card at Evangeline Downs in Opelousas, Louisiana.

Cox was aboard Mississippi Stud in the 4th race at Evangeline Downs on Friday's card, and went to post as the odds-on favorite aboard the Randy Hebert trainee.

After making the lead and proceeding the rest of the field into the stretch, the three-year old gelding faded in mid-stretch and held on to finish 6th in a field of eight. Approximately 80-yards past the wire, Mississippi Stud fell to the ground, sending Cox plummeting downward onto the Opelousas racecourse.

On June 21 to this year, Cox was aboard Jumpn Streaker at Delta Downs on when he went down. He suffered He sustained two broken vertebrae in that accident. 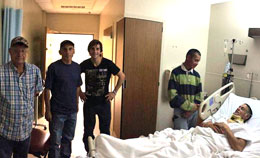 Eddie Cox being visited in the hospital by former rider Frank Rodriguez, and current fellow riders Gilbert Ortiz, Lucas Constantine, and David Alvarez.
Photo Courtesy Rhonda Cox
According to Cox's wife Rhonda, the veteran rider re-fractured his C2 vertebra, as well as fracturing C5 and C6. Cox was transported this morning to Lafayette for surgery on the injuries that resulted from the spill.

Late Sunday it was reported that Mississippi Stud had recovered from the fall and was doing fine without suffering a major injury.