© Courtesy Of The Georgia O'Keeffe Museum 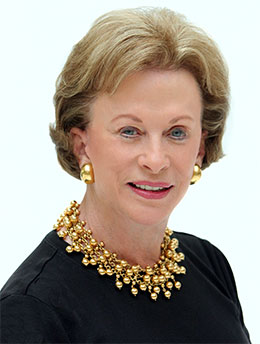 Memorial Service Set Thursday For Anne Burnett Windfohr Marion
FORT WORTH, TXFEBRUARY 14, 2020Anne Burnett Windfohr Marion, whose epic Texas life included prominence as a leading rancher and horsewoman, philanthropist, and an internationally respected art collector and patron of the arts, died Tuesday in California after a battle with lung cancer.

The news of her passing inspired tributes from her native Fort Worth and around the nation.

"Laura and I mourn the passing of Anne Marion, President George W. Bush said on Wednesday. She was a true Texan, a great patron of the arts, a generous member of our community, and a person of elegance and strength. Texans have lost a patriot, and Laura and I have lost a friend. We send our sympathies to her husband John, her daughter, Windi, and to her grandchildren who love and miss her."

With her husband, John L. Marion, Mrs. Marion founded the renowned Georgia OKeeffe Museum in Santa Fe, N.M. The museum opened in 1997 with 50 paintings, but today features 2500 paintings and objects and has become one of the states most beloved attractions. Mrs. Marion was chairman of the museum for twenty years and was appointed chairman emeritus in 2017.

The Georgia OKeeffe Museum exists today because of Anne Marions vision to create a single-artist museum devoted to Georgia OKeeffes work and legacy, said Cody Hartley, director of the OKeeffe Museum. With Mrs. Marions passing, we have lost an incredible woman whose spirit inspired and animated all we do at the OKeeffe. Our collective sorrow is matched only by our admiration and gratitude for her leadership. We are thankful for Mrs. Marions generosity, and are proud to carry on her commitment to Georgia OKeeffes art and life story. Mrs. Marion will be deeply missed and long remembered for the legacy of her generosity to New Mexico.

But Mrs. Marion also put her indelible mark on the cultural life of her home city. As a longtime member of the board of directors, she was a primary influence and benefactor of the Fort Worth Museum of Modern Art, and the driving force behind the creation of the museums internationally renowned building, designed by acclaimed architect Tadao Ando, which opened in December 2002.

Anne Marion was one of the most generous, admirable and inspirational people I have ever known, said Marla Price, director of the Museum of Modern Art. She chaired the building committee that chose Tadao Ando in 1997 as architect of a new building. Together with Mr. and Mrs. Perry Bass, they provided the majority of funds for the project and guaranteed that the resulting building would be one of the finest in the world. Her great leadership and generosity to the museum has continued until the present, and her loss is heartbreaking for everyone involved with the Modern.

I am deeply saddened by Annes passing, Mrs. Fortson said. She was one of my oldest and dearest friends, but more than that, she was a trusted director of the Kimbell Art Foundation, serving 40 years. I will greatly miss her.

Kimbell director Eric Lee said that Mrs. Marion, while quiet by nature, was an epic force in Fort Worth and beyond.

I cannot imagine the city without her, Lee said. But through the enormous impact she made on the city, state and nation, her presence will always be felt. She touched countless lives through her kindness and generosity, which knew no bounds.

Lee noted that Mrs. Marions passions were wide ranging and included the American West and art, about which she was tremendously knowledgeable.

She formed a breathtaking collection of her own, and gave countless works to museum, including the Kimbell Art Museum, the National Cowgirl Hall of Fame, and the institutions she essentially built: The Fort Worth Museum of Modern Art and Santa Fes Georgia OKeeffe Museum. She truly was one of the greats.

There are only a handful of people who have made a truly transformational difference in TCU: Anne Marion is definitely in that group, said TCU Chancellor Victor Boschini. She also comes from a family that has had a 100-year history of helping all things Texas Christian University. Personally, Megan and I will be forever indebted to her for her friendship, her counsel and her wry sense of humor, too.

She was born Anne Burnett Hall in Fort Worth, Texas, the great-granddaughter of Samuel Burk Burnett, legendary Texas rancher, landowner and oilman. The daughter of Anne Burnett Tandy and James Goodwin Hall, Mrs. Marion inherited her parents love of horses as well as oilfields and the land.

Those holdings today include the historic Four Sixes Ranch in King County, Texas. The 6666 Ranch, one of the most storied outfits in Texas, is world-renowned for its Black Angus cattle and American Quarter Horses. The three ranches today encompass 275,000 acres.

According to Western Horseman, which profiled the ranch in a 2019 cover story, Mrs. Marions attachment to the ranch was deep and lifelong. She described her youth growing up on the ranch was one of the most important things that had happened to her, because of the discipline, work and experience it provided.

Her leadership, active involvement and management were much appreciated by the ranchs cowboys. The ranch was among the first in the industry to provide medical benefits and retirement plans to its staff. Mrs. Marion also insisted on excellent living and working conditions and benefits for the cowboys, which inspired their deep devotion and explained why many worked the ranch for decades.

In addition to serving as chairman of Burnett Ranches, she was the chairman and founder of the Burnett Oil company, and president of the Burnett Foundation. Over nearly 40 years, the foundation has distributed more than $600 million in charitable grants, supporting arts and humanities; community development; education, health and human services.

Her generous philanthropy was not limited to the financial. Mrs. Marion was deeply involved with a number of institutions in Fort Worthwhere she was named the citys Outstanding Citizen in 1992and far beyond.

Mrs. Marion served as a director of Texas Health Harris Methodist Hospital in Fort Worth and was the namesake of the Marion Emergency Care Center at the hospital. She was a major contributor to Eisenhower Health in Rancho Mirage, California.

Anne taught us about things that really matter...like character and courage, said G. Aubrey Serfling, president and CEO of Eisenhower Health. Im not sure I have ever met someone quite like her, who made such a large impact on all of us, including our doctors, but did so in her own independent way. Anne helped us with our largest projects in history but would never let us put her name on anything. She was simply amazing.

Her board directorships reflected her wide-ranging interests. In addition to the Kimbell Art Foundation and the Georgia OKeeffe Museum, she was director of the Texas and Southwestern Cattle Raisers Association in Fort Worth; member of the Board of Overseers of Memorial Sloan Kettering Cancer Centre in New York City; and director emeritus of the National Cowboy Hall of Fame in Oklahoma City, among others. Her past directorships included the board of regents of Texas Tech University, The Museum of Modern Art in New York and The Fort Worth Stock Show.

Her many awards include the Great Woman of Texas (2003); the Bill King Award for Agriculture in 2007, the first woman to receive this award; and in 1996 the Governors Award for Excellence in the Arts, in Santa Fe, N.M. She was inducted into the National Cowgirl Museum and Hall of Fame in 2005; the American Quarter Horse Associations Hall of Fame in 2007 and The Great Hall of Westerners National Cowboy and Western Heritage Museum in 2009.

As a woman of faith, Mrs. Marion was a life-long member of St. Andrews Episcopal Church of Fort Worth.

Mrs. Marion is survived by her husband, John L. Marion, Chairman Emeritus of Sothebys and former Chairman and Chief Auctioneer of the international art auction house. He and Mrs. Marion were married in 1988.

The family respectfully requests no flowers but should one desire, memorials may be made to a charity of choice.