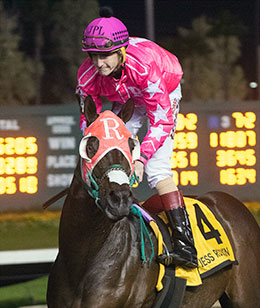 Cooper reported that the 2019 AQHA champion filly is doing great and will be heading to Firth Ranch this weekend to begin her rehabilitation.

Bred by Reed Land & Cattle/Levings Racing, the daughter of Favorite Cartel out the Feature Mr Jess mare Feature Jess Rockin won four of 12 starts and earned close to $850,000 in her racing career. The Hartleys purchased her for $18,000 at the 2018 Heritage Place Sale.

She was a dandy on the racetrack, John Cooper said. She wanted to everything right and she often did. Shell be a great dam. She had a fracture and needed to have pin inserted. Shell be going home this weekend to start the next phase of her life. Ill miss her but look forward to seeing her babies for years to come.