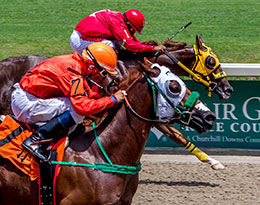 The state-bred race, for hoses who passed through the 2018 LQHBA Yearling Sale will be contested as the 10th Race at a distance of 350 yards. Estimated post is 3:54 pm (CDT).

The son of multiple stakes sire Mr Piloto enters Saturday's race off a neck win over Special Political in the August 17th trials after bobbling the break. Ed O and jockey Everardo Rodriguez completed the 350 yards in :17.622 seconds into a 10 mph cross wind to get the sixth fastest qualifying time.

Prior to that, Edo O has finished in both the aforementioned Lee Berwick Futurity(RG1) and the Laddie Futurity(RG2) at Delta Downs over the summer. Conditioned by trainer Jose Lopez the Edwardo Lopez owned gelding has compiled a (5) 2-3-0 record and banked $198,649 this season. Out of the Heza Fast Dash mare Shezadashinatcha, Ed O was a $4,700 LQHBA Yearling Sale repurchase.

Jess A Cajun (6-1) enters the futurity off a two-race win streak after defeating Brileys Prize (9-2) by a neck in the August 17 trials. The son of leading sire Heza Fast Dash races for owner Lester Colomb, Jr. and is conditioned by trainer Kenneth Weeks. He stepped up in class to set the fastest qualifying time after breaking his maiden in a claiming race t Delta on June 29.

The partnership of Jason Richards, Roddy Richards and Jason Mills purchased Jess A Cajun for $25,000 at the LQHBA Yearling Sale but sold him to Colomb, Jr. prior to the sale futurity trials.

Brileys Prize (9-2) will start for owner RC Stables LLC and trainer Mardonio Flores, Jr. The son of third-crop sire Ajs Fast Dash finished a neck off Jess A Cajun in the trials under jockey Luciano Duenez. The $15,000 LQHBA Sale repurchase will be making his first stakes appearance after compiling a (6) 1-2-2 record this season.

The LQHBA Sale Futurity(RG1) field, by post position, with jockey and morning-line odds:

Race 6, the $25,000 De Saix Stakes for 2-year-olds will be contested over 300 yards. Triple Cross Racing LLC's Blueacrossyourmind has been installed a 3-1 as the morning-line favorite. Trainer Trey Ellis conditions the Jess Louisiana Blue gelding out of Doieverycrossyourmind by Mr Eye Opener. Luis Vivanco has been tapped to ride the gelding who has won two of three starts this season. His only loss came in the $369,405 Laddie Futurity(RG2) in May.

Race 7, the $40,000 Lakeview Dash Stakes will be contested over 250 yards for accredited Louisiana-bred 3-year-olds and up. Crown Horse Racing LLC's Shesa Diamond Diva has been installed as the (5-2) morning-line favorite. Jose Luis Sanchez III trains the 4-year-old daughter of Struttin To Beduino. Ridden by Eddie Sanchez, the gray mare will be making her 2019 debut after finishing second to Dashnunder Afullmoon in the $267,000 LQHBA Derby at Evangeline last December.

Race 8, the $25,000 French Quarter Stakes for 3-year-old & up fillies and mares will be contested at a distance of 330 yards. Crown Horse Racing's above mentioned Shesa Diamond Diva has been cross-entered in the French Quarter where she is again the 5-2 morning-line favorite. Montgomery Equine Center's Fastdashing Lassie (9-2) will be handled by champion trainer Kenneth L. Roberts Sr. and ridden by jockey David Alvarez. She was second in the Audubon Stakes the opening weekend of the Fair Grounds meet.

Race 9, the $40,000 Mid-City Stakes(RG2) for 3-year-old & up accredited Louisiana-breds will be contested the classic Quarter Horse distance of 440 yards. Myron McKinnon's Dlj Imma B Famous is the (7-2) morning-line favorite for trainer Alberto Solis. Ricardo Hernandez, Jr. has been tapped to ride the multiple graded-placed son of Coronas Leaving You. Dlj Imma B Famous will be looking for his first career stakes win while entering off a second-place effort in the Louisiana Classic Stakes(RG3) at Delta in July.

First post for the 11 race Fair Grounds card on Saturday is noon (CDT).