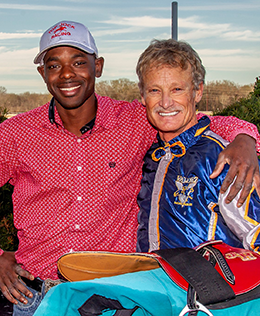 The $15,000 Marathon Stakes Set For Saturday At Harrahs Louisiana Downs
BOSSIER CITY, LAJANUARY 20, 2020The 2020 Quarter Horse racing season at Harrahs Louisiana Downs got underway on January 4. Stakes action continues Saturday with distance specialists entered in the $15,000 Marathon Stakes. This will be the 14th running of the 870 yard stakes, with a compact, but competitive field of five entered.

Gary Abers Desire Astoli has been installed as the 3-5 morning line favorite. The 5-year-old daughter of Desirio out of the Stoli mare Stoli Victory, has won her last three distance races for top Louisiana conditioner Kenneth Roberts, Sr. She will make her 20th career start on Saturday with previous efforts in New Mexico. She was undefeated last year in Louisiana, with one win at 770 yards and two consecutive victories at 870 yards. Donald Watson will ride the Texas-bred.

We thought she would like to go longer and decided to try it last year, said Roberts. You dont see too many mares holding their own against males in hook races, but she really does well. Shes been training well and we thought this would be a good spot for her.

Canselman drew the rail for owner Q & S Racing. The gelded son of Favorite Cartel exits a three-length 870 yard victory on December 4 at Evangeline Downs. He was ridden by Cristian Esqueda, who has the return call.

Freakin Patriot Dash will break from the outside post under Pedro Espinosa and has won four of his nine distance starts. The 5-year-old son of Game Patriot is trained by Pedro A. Lopez. The field also includes Im Mighty Fast, a 7-year-old gelding by Mighty Corona, who will make his 49th start under Rolando Cabrera. The Louisiana-bred, owned by Triple M Racing Stables, LLC is a stakes winner and boasts the top earnings mark of $190,395.

Here is the field, in post-position order including jockey assignments and morning-line odds:

Trainer Ray Mayo has already won three races this meet at Harrahs Louisiana Downs. The 33-year-old rode professionally for 9-½ years before beginning a second career as a trainer.

This is the third year Mayo is running racehorses and he did not hesitate in enlisting his good friend John Hamilton to ride. They teamed up with Peytons Last Dash ($11.40) in Saturdays $15,000 Harrahs Dash for owner Rosendo Valdez. On the Monday card, they won the second race with Game Overtime ($4.00) and Jls Carter Jo ($14.40), in the fifth race on the card. Both runners were also owned by Valdez.

Although over two decades apart in age, Hamilton is not surprised that Mayo is having success as a conditioner.

He is a good trainer and a real class act, said Hamilton. I was the best man at his wedding, and he has always been there for me. Ray is super motivated and I am happy to ride for him.

Jockey Everardo Rodriguez is recovering from a spill on January 4. The 30-year-old rider suffered a fracture to his T-12 vertebrae and minor injuries to his hand and ankle. He is expected to be out of action for three weeks, according to his agent, Gerald Thomas.

Harrahs Louisiana Downs is hosting an exciting on-track handicapping contest called the Road to Kentucky Handicapping Contest. It will begin on Saturday, January 18 with major stakes races and Kentucky Derby prep races featured each Saturday through May 2. Fans can register at the contest table adjacent to the program stand with weekly prizes awarded and points accumulated toward the $1,000 grand prize.

About Harrahs Louisiana Downs
Located near Shreveport in Bossier City, Louisiana, Louisiana Downs opened in 1974 and was purchased by Caesars Entertainment in December 2002. With annual Thoroughbred and Quarter Horse racing seasons, the track is committed to presenting the highest quality racing programs paired with its 150,000 square foot entertainment complex offering casino gambling, dining and plasma screen televisions for sports and simulcast racing.