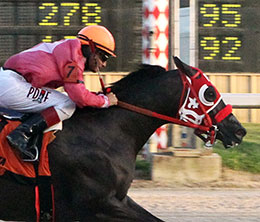 Preston Jourdans Tuckers Prize, a 4-year-old Fast Prize Dash gelding trained by his owner, is the 6-5 morning-line favorite in the first division. Tuckers Prize has won his last four starts, and he is coming off of a nose victory as the 3-2 choice in the 400-yard, $100,000 Louisiana Champions Day Derby (R) at Fair Grounds Racecourse in New Orleans on December 14.

Tuckers Prize drew post 6 and will be ridden by Damian Martinez.

The second division of the Mr Jess Perry Stakes is headed by Myron McKinnons DLJ Imma Be Famous. A 7-year-old son of Coronas Leaving You, the gelding made his season debut with a second-place finish, a head behind winner SS Classyjess, in a 350-yard, 15,000 stakes at Louisiana Downs on January 25.

DLJ Imma Be Famous is the even-money morning-line choice in the second division. The gelding drew post 5 and will be ridden by Ricardo Hernandez Jr. for trainer Eduardo Morales.

All Louisiana Downs races can be seen at Q-RacingVideo.com.