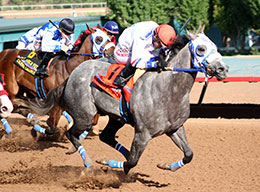 Louisiana Based Stallions Dominate 2020 All American Races Labor Day
RUIDOSO DOWNS, NMSEPTEMBER 10, 2020Louisiana-based stallions Freighttrain B and Coronas Leaving You sired the winners of both the $3-million All American Futurity(G1) and the $200,000 All American Juvenile on Labor Day (Monday) at Ruidoso Downs.

Whistle Stop Cafe, the undefeated daughter of Freighttrain B, posted her sixth career win in as many starts when she held off Instygator to win the $3-milllion All American Futurity for owner Whitmire Ranch. The $42,000 Heritage Place Yearling Sale graduate was bred in Oklahoma by AQHA Racing champion breeder Bobby D. Cox.

Saddled by champion trainer G. Blane Wood, the gray filly from the Mr Jess Perry mare Sinuous, gave champion jockey Ricky Ramirez his first-ever win in the All American Futurity(G1). She has earned $1,974,986 this season.

In the $200,000 All American Juvenile, the undercard stakes on Ruidoso Downs Labor day program, Eye Work For You defeated Dulce Sin Tacha to take home the winner's purse valued at $80,000. The daughter of champion sire Coronas Leaving You has won four of six races this season and banked $465,466.

Also bred in Oklahoma, by Jose Acosta, Eye Work For You races for owner Jose Guzman and is trained by Jaime Hernandez. Champion jockey James Flores was aboard the filly from the Mr Eye Opener mare Eye Love It. Earlier in the year Eye Work For You won the $891,900 Remington Park Oklahoma-Bred Futurity.

Flash Bak, a 2-year-old by first-crop sire Moonin The Eagle, had a troubled trip in the $3 million All American Futurity, when he was forced in at the break and jockey Jesus Ayala had to check the sorrel gelding owned by Dutch Masters III. The John Stinebaugh trained colt qualified to the All American Futurity by finishing a half-side off eventual winner Whistle Stop Cafe in the August 21 trials. He earned $105,000 for finishing seventh.

All three sires, Freighttrain B , Coronas Leaving You and Moonin The Eagle stand at Hart Farms in Kaplan, Louisiana. For additional information or breeding contracts call (337) 643-3255.