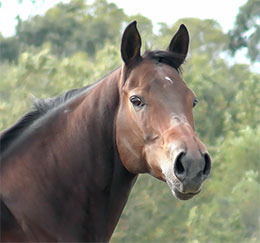 "Jessie has done so much for our family," said Ted Abrams, Sr today. "I spoke with his trainer, Jimmy Padgett, and we both decided it was time to allow him the good life that he has earned. We have brought him back home to the place where he was foaled, and has the company of his dam, grand dam, and multiple siblings here on the ranch."

Under trainers Jimmy Padgett II and Judd Kearl, Jessies First Down won or placed in 32 of 40 career starts while earning $1,624,002. He was named the 6-time AQHA Racing Champion took World Champion honors in 2016 and 2017. 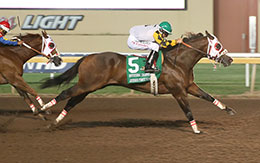 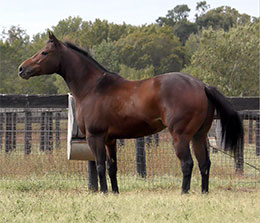 Jessies First Down in his paddock at Ted and Nancy Abrams' Rafter A Ranch in Hempstead, Texas.
© Greg Thompson / StallioneSearch
Abrams bred Jessies First Down in Texas from the Mr Jess Perry mare Jess A Classy Lassy, dam of 9 foals, 6 winners. She also produced 2019 Rainbow Futurity(G1) finalist Jess A Zoomin ($ 106,990 at 2). This is the family of Ed Burke Memorial Futurity(G2) winner Miss Mighty Mary ($331,749), etc.

At 2 and 3, Jessies First Down was winless in nine starts. He broke his maiden in his first career start at 4 by winning the Hialeah Maturity at Hialeah Park. From their he moved to the top of the Quarter Horse racing game. Jessies First Down retires with a (40) 19-12-1 record.

"Jessie has come back home, and we are proud to have him back," said Nancy Abrams. "We are just one big happy family now, and he has taken us on a very fun ride. To have him retire as a sound race horse is just more than we could have ever asked for."