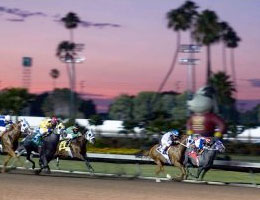 The first race on Fridays will now be held approximately 30 minutes after the final daytime California Thoroughbred race. The Early Pick Four will get started with the opening race of the card at 5 p.m. The Late Pick Four sequence will consist of the final four races on the card.

Los Alamitos kicked off its 70th year of live racing at the Cypress oval with an earlier Friday post time on December 26. The results were positive, as it resulted in the highest handle for a Friday card this season. As usual, TVG will provide live coverage of the entire Los Alamitos racing program.

Entries will be drawn on Wednesday for Saturday and on Thursday for Sunday.