Ridden by Stormy Smith for owners Louis Howard and Corrine Howard, Let There Be Sound covered 870 yards in :44.711, and his margin of victory was three-quarters of a length from a fast-closing Ms Esther.

The 5-year-old gelded son of One Famous Eagle from the Rossini(TB) mare Sakakawea(TB) earned $51,205 from his seventh win in 22 starts and third stakes victory. 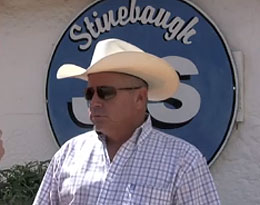 Trainer John Stinebaugh saddled his third Grade 1 Distance Challenge Championship winner.
Let There Be Sound was bred in Iowa by Black Oak Farm, and he has won his last four races, including the 870-yard, $53,000 Cox Ranch Albuquerque Distance Challenge Championship (G3) at Albuquerque Downs on July 28. The gelding has won seven of 10 outs at the 870-yard distance, and he has banked $172,941, of which $163,485 has been earned in his 870 starts.

A $1,500 purchased for owner-trainer Jordan Baumann, runner-up Ms Esther earned $21,945 for second. The multiple graded winning daughter of Afrashad (TB) was bred in Oklahoma by Duwyne and Janice Pfeifle and ridden by jockey Alfredo Triana, Jr. The $145,085 earner is out of Tres Down The Cash by Tres Seis.

Trainer Tammy Kay Johnson conditions Ray and Davy Madewell's Oklahoma homebred Madewell who earned $10,973 for third. The 5-year-old son of Jess Jones is out of Streakin Peacock by A Streak Of Cash.

Albuquerque Downs Racetrack and Casino is located in the heart of Albuquerque at Expo New Mexico, the home of the New Mexico State Fair, and general admission and parking are always free (via the casino entrance on Louisiana and Central). For more information, visit abqdowns.com and click on the "Racing" link at the top of the homepage.