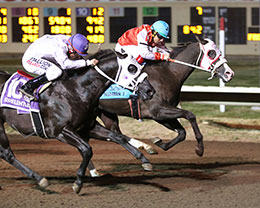 Ridden by Jose Vega for trainer Eddie Willis, Jay Number 7 defeated Rrelentless by a head in :17.516. Sent to post as the 11-10 favorite in the full field of 10, the brown Oklahoma-bred gelding returned a $4.20 win mutuel while banking the $60,088 winners share of the purse from his first-ever start in New Mexico.

Jay Number 7 is out of First Ginlark, a 7-year-old daughter of the First Down Dash stallion My First Moon who won the 2014 Will Rogers Juvenile Challenge Stakes in Oklahoma. The gelding has won six of nine starts, including two stakes, and he has banked $185,031.

Runner-up Rrelentless earned $26,125 to increased his bankroll to $90,685. The son of leading first-crop sire Hes Relentless races for Rrelentless Partners and is conditioned by Gregg Sanders. Bill Robbins bred the black colt in Oklahoma from the First Down Dash mare First A Princess. James Flores was riding.

Albuquerque Downs Racetrack and Casino is located in the heart of Albuquerque at Expo New Mexico, the home of the New Mexico State Fair, and general admission and parking are always free (via the casino entrance on Louisiana and Central). For more information, visit abqdowns.com and click on the "Racing" link at the top of the homepage.