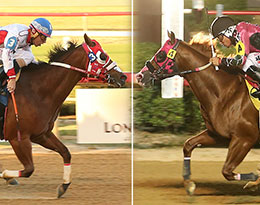 Trained by Adrian Huitron for owners Omar and Anna Paredes, Chilitos has won all three of his starts at Lone Star this fall, including the 400-yard, $344,050 Dash For Cash Futurity (G2). The homebred son of world champion Apollitical Jess drew post 6 and will be ridden by Nestor Duran.

All Lone Star Park races can be seen at Q-RacingVideo.com.