Yanque Goes For Third 550-Yard Stakes Win In A Row On Sunday
Yanque will go after his third consecutive 550-yard stakes victory when he faces five outstanding rivals in the $16,000 Barbra B Handicap on Sunday. 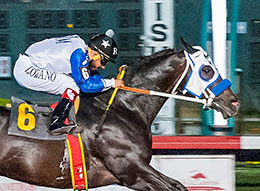 Yanque Goes For Third 550-Yard Stakes Win In A Row On Sunday
LOS ALAMITOS, CAJANUARY 10, 2020Martha Wells Yanque will go after his third consecutive stakes victory at 550-yards when he faces five outstanding rivals in the $16,000 Barbra B Handicap. First post is 5:25 p.m. (PST).

Yanque was too much for his rivals to handle in both the Scott Lewis Handicap on November 8 and the Paul Ford Handicap on December 1. He won both races by 1 1/2 and he did so in near wire-to-wire fashion.

The 5-year-old gelding by Favorite Cartel has always shown a special finishing kick and the 550-yard distance has allowed him to flex his muscles in route to convincing victories. Ruben Lozano will ride Yanque for trainer Matt Fales.

Dan Wilsons 7-year-old distance specialist Run Raging Rhino Run will be looking to defend his stakes title in the Barbra B Handicap. He won this race by 1-¼ lengths last year, but he was second to Yanque in the Paul Ford two races back. Hes been first or second in eight of his last 11 starts with all but one of those starts coming at either 870 or 550 yards.

Thompson Racings Ballast Point, second in the Scott Lewis, will also look to spoil Yanques bid for a third straight win. He enters after winning a division of the 870 yard Snowbound Superstar.