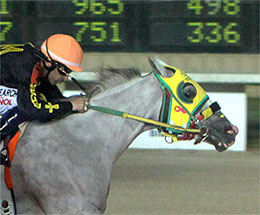 Horsemen were so enthusiastic with nominations that David Heitzmann, Director of Racing at Harrahs Louisiana Downs, wrote a second stakes for accredited Louisiana-bred 3-year-olds going 350 yards.

Contenders in the first division of the Billy Montgomery include Joeseph Landreneaus Jess Redwhiteandblue, who is the high earner in the ten-horse field. The gelded son of Jess Louisiana Blue out of the Azoom mare Ha Chi Mama, competed in trials for four futurities in 2019, running in the final of the $369,405 Laddie Futurity at Delta Downs. With regular pilot Everardo Rodriguez recovering from a back injury, trainer Lanny Keith has chosen Antonio Alberto to ride Jess Redwhiteandblue as he kicks off his 3-year-old campaign.

Hes a big, good looking runner and has been knocking on the door, said Keith. We had a few minor setbacks last year and a little bad luck, especially in the gates of the LQHBA Louisiana Million, but hes been training well, and we thought this would be a good race for him.

Ms Diamond Prize will break from the rail under David Alvarez. The filly by Fast Prize Jordan made ten starts in 2019 for owner Jesus Huitron Lira, qualifying for the $428,475 LQHBA Sale Futurity on September 7 at Fair Grounds. She exits a solid runner-up finish in the $100,000 Louisiana Champions Day Juvenile last month. Pedro A. Lopez trains the sorrel filly.

Rogelio Marquez, Jr.s Patriot on Ice hit the board in each of his four races in 2019. The son of Jet Black Patriot is trained by Alberto Solis and ran third in the $305,296 Mardi Gras Futurity here last March. A Quick Jewel, also sired by Jet Black Patriot, ran in the $700,000 Lee Berwick Futurity on July 7. He is conditioned by Miguel Rodriguez, who won his third edition of the LQHBA Louisiana Million last month at Evangeline Downs.

Here is the field for the Billy Montgomery- Division 1 (Race 5), in post-position order including jockey assignments and morning-line odds:

In the second division, Runaway Second Down has been installed at the 6-5 morning line favorite. Owned by Eulalio Argote and Victory Alvarado, the speedy gray exits an impressive 2-year-old season, which included a victory in the $700,0000 Lee Berwick Futurity and $100,000 Louisiana Champions Day Juvenile. Sired by Sir Runaway Dash out of the Mr Jess Perry mare Second Down Perry, he has already banked $413,526 in eight starts. Trainer Robi Meche will give a leg up to rider Raul Ramirez, Jr.

Runaway Second Down is such a wonderful horse, she said. He is so easy to train and has such a big heart! After his races, we bring him back to the farm as he has never liked being stabled on track. We are so grateful to Chico, who has come to Louisiana to stand him and ride for us. Other notables include Blueacrossyourmind, owned by Triple Cross Racing LLC. John Hamilton will pilot the son of Jess Louisiana Blue, who boasts two wins from five starts for trainer Trey Ellis. Eddie L. Harrisons homebred One Fast Perry will break from the far outside under Antonio Alberto. The colt by Fast Prize Jordan began his 2-year-old season at Louisiana Downs and will be seeking his first stakes win for conditioner Lanny Keith.

Here is the field for the Billy Montgomery- Division 2 (Race 7), in post-position order including jockey assignments and morning-line odds:

Saturdays card will also feature trials for the $15,000-added-Louisiana Downs Maiden Stake, written for 3, 4 and 5-year-old accredited Louisiana-breds. The trials, carded as two through five, attracted 28 horses competing at 350 yards. The top ten qualifiers will return for the Saturday, February 8 final.

Harrahs Louisiana Downs is hosting an exciting on-track handicapping contest called the Road to Kentucky Handicapping Contest. It will begin on Saturday, January 18 with major stakes races, including key Kentucky Derby prep races featured each week through May 2. Louisiana's road to the 2020 Kentucky Derby begins Saturday with the Grade 3, $200,000 Lecomte Stakes. Fans can register at the contest table adjacent to the program stand with weekly prizes awarded and points accumulated toward the $1,000 grand prize.

Louisiana is well-represented in many of the categories with multiple nominations for champion 2-year-old gelding. Last years champion breeder Grant Farms is a finalist as well as trainers Kenneth Roberts, Sr. and Josue Ponce. Everardo Rodriguez, John Hamilton, Luciano Duenez and Luis Vivanco have made the list for champion jockey.

About Harrah's Louisiana Downs
Located near Shreveport in Bossier City, Louisiana, Louisiana Downs opened in 1974 and was purchased by Caesars Entertainment in December 2002. With annual Thoroughbred and Quarter Horse racing seasons, the track is committed to presenting the highest quality racing programs paired with its 150,000-square foot entertainment complex offering casino gambling, dining and plasma screen televisions for sports and simulcast racing.