New Stallions Enter Stud For 2020
Ten first-year stallions have enrolled as "member stallions" on StallioneSerach.com for 2020. 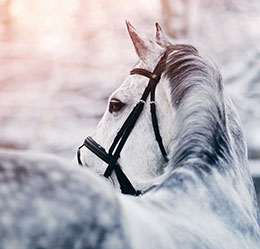 Full brothers Call Me Cole ($2,600) and Rip Tide ($2,000) head the contingent of stallions from the First Down Dash sire line for 2020, through their sire Corona Cartel, the #2 all-time leading sire who is a grandson of First Down Dash through his sire Holland Ease.

The other two new comers are the multiple Grade 1 winning Thoroughbred Mitole and champion Tarzanito who traces to former Horse of the Year Favorite Trick (TB) through his sire, 2019's Leading 2-Year-Old Sire of Money Earners Favorite Cartel.

Listed in order of stud fee are the talented group of stallions making their debut in 2020.

Flying Cowboy 123 ended his 3-year-old season with a win in the Grade 1 Texas Classic Derby. Last year's champion 2-yaer-old colt was also third in the All American Derby(G1) and a finalist in the Ruidoso QH Derby(G1). He increased his earnings mark to $1,045,811 and should be on track to repeat as the champion male of his age group.

Texas owner-breeder Bill Heiligbrodt keeps it simple when he's shopping at auction for racehorses. "I like fast horses. I figure if I have a fast horse, I can win a race somewhere," Heiligbrodt said.

Mitole laid a blazing trail through the 2019 racing season with four grade 1 victories won by a combined 8-½ lengths. He broke his maiden by 10 lengths at Oaklawn Park in 2018. Before the end of the year, he had added black-type wins in the Bachelor and Chick Lang stakes last year.

Through a special agreement between Robicheaux Ranch and Spendthrift Farms, Mitole and leading Thoroughbred sire Into Mischief will be offered to Quarter Horse mares for the first time.

Bred in California by Patricia Visscher, Tarzanito won or placed in 18 of 26 career starts, earning $429,657. He was named the AQHA Racing Champion Aged Stallion in 2018, following a season that included winning the Grade 1 Go Man Go Handicap and placing in the three other Grade 1 races at Los Alamitos Race Course, defeating the likes of AQHA Champions Hold Air Hostage, Zoomin For Spuds, and Heza Dash A Fire.

Rip Tide SI 107, a stakes winning full brother to 2019 Rainbow Futurity(G1) winner Uncle D and Grade 1-placed Call Me Cole, is a son of #2 all-time leading sire Corona Cartel, He won or placed in 16 of 20 career starts and earned $123,283. Rip Tide won the Par-A-Dice Stakes at Delta Downs this year, completing the 330 yards in :16.362 seconds, just missing the track record while equaling a 107 speed index.

Rip Tide was second in the Mr Jess Perry Derby at Ruidoso Downs and the Esplanade Stakes at the Fair Grounds Race Course, and a finalist in the Grade 1 Los Alamitos Super Derby, Grade 1 Vessels Maturity and Z Wayne Griffin Director's Invitational-Div.1.

. Rip Tide is out of a full sister to leading Louisiana sire Sir Runaway Dash, who died earlier this year following a very successful stallion career at Tate Farms.

Kas Tempting a Grade 2 is a home bred for Garza Laurel Partnership LLC The son of champion Tempting Dash has won or placed in 11 of 16 career starts and earned $153,780 to 4. He won the Bank of America Texas Championship Challenge(G2), TQHA Classic Stakes and was second in the Sam Houston Derby(G3), and King William Stakes.

His sire is the undefeated AQHA Racing Champion 2-Year-Old Colt Tempting Dash SI 112 ($673,970), who set a new 400 yard track record at Lone Star Park while winning the Texas Classic Futurity in :19.205. From only seven-crops to race the son of all-time leading sire First Down Dash has sired 26 stakes winners, 1 champion with earnings of nearly $9 million.

Grade 2 winner Hawkeye SI 105 hails through the Mr Jess Perry line through his sire world champion One Dashing Eagle, a son of champion One Famous Eagle (by Mr Jess Perry). One Dashing Eagle ($2,079,065 as 2), has sired 132 winners, 14 stakes winners, 1 champion with earnings of nearly $5 million in four crops to race. Hawkeye will join the stallion roster at Granada Farms near Wheelock, Texas for a fee of $1,500.

A Texas homebred owned-and-raced by Bobby D. Cox, Hawkeye won or placed in eight races and earned $219,737. He won the Grade 2 Sam Houston Classic, Harris County Classic and was second in the Bank of America Canterbury Park Championship Challenge. The gray colt was also a finalist in the All American Futurity(G1), Rainbow Derby(G1) and the James Isaac Hobbs Stakes(G3).

Perrys Stamina SI 99 is the only direct son of leading sire Mr Jess Perry to enter stud in 2020. A grade 1 Ruidoso Futurity finalist Perrys Stamina will begin his stallion career in 2020 at Sierra Blanca Equine near Ruidoso Downs, New Mexico. His fee has been set at $1,500.

Perrys Stamina won or placed in seven races to 4, earning $112,736. He broke his maiden and qualified for the Grade 1 $1 million Ruidoso Futurity in his very first start. He was also 4th in the James Isaac Hobbs Stakes(G2), 4th in the Highesasterjet Handicap(G3) and a finalist to the All American Juvenile.

Eagle Deluxe will begin his stallion career at Spring Hill Farms near Kaplan, Louisiana for a fee of $1,000, with consideration to multiple and stakes mares.

The multiple stakes winner has won or placed in 18 races and earned $162,587. Named AQHA's Central Hi-Point 3-Year-Old of 2018, Eagle Deluxe won the Keokuk Stakes(G3), North Central QHRA Futurity and Mystic Lake Northlands Juvenile. He was second in the Two Rivers Stakes (G3) and third in the Canterbury Park Derby.