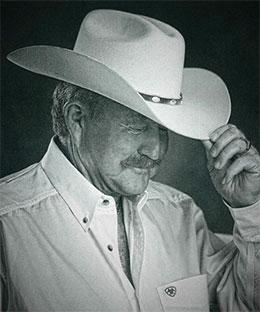 Denny, of Jerome, Idaho, was born April 16, 1945, and operated a dairy as a profession. He was loved and cherished by many people, including his parents, Adrian Kenneth Boer and Julia Darlene (DeBoer).

Denny and partner Dr. James Streelman were friends since the first grade, and Denny has been partners in the group for the majority of the time. Dutch Masters raced such top horses as champions Four Forty Blast, Secret Card and Higher Fire, and top horses like Holland Ease, Gold Nugget Rd and Twin Spires.

They were named the sport's champion owners in 2001 and 2005. They were also named champion breeder in 2005. They are the sport's No. 2 all-time leading owners by money earned and among the Top 25 all-time breeders by money earned. They also saw trainer Bob Baffert saddle their co-owned Thoroughbred Thirty Slews to win the 1992 Breeder's Cup Sprint.

Dutch Masters III was inducted into the Ruidoso Hall of Fame in 2017.

Denny also loved his country and served in the Marine Corps Reserves while he continued to work in the family business.

The family relocated the business to Chino, CA and they formed a partnership with Adrian Sr., Adrian Jr. and Denny called K & W Dairy. Denny later moved to Jerome where he started Dennis Boer Dairy.

Denny was known for his generosity, friendliness and being a straight shooter. He found his love for singing and the Lord in church hymns at a young age.

In his later years, he took up karaoke with the love of his life, Gloria Slegers. She loved and cared for him while he was fighting stage four lung cancer.

Denny is survived by two sisters who he loved and adored, Sharon (John) Haagsma and Pat (Boer) Jones; and a brother he loved and looked up to, Adrian (Linda) Boer.