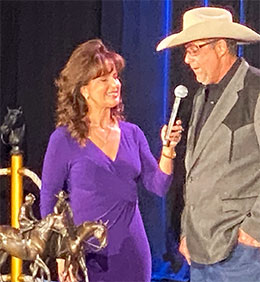 He also earned the title of champion aged horse and champion aged gelding after a season that saw him win five of 10 starts and earn $420,036. As a freshman, He Looks Hot won the Los Alamitos Two Million Futurity (G1). He was unraced in 2015 due to health scares, but for an unbelievable four consecutive years after that, he has qualified to the Champion of Champions (G1). In 2019, he won it, defeating a top field of horses that included two other champions for 2019.

Trained by Scott Willoughby and ridden by Vinnie Bednar, He Looks Hot also won the Spencer Childers California Breeders Championship (RG1) and Moonist Handicap. The gelding, who also earned his AQHA Supreme Race Horse title during the year, is by Walk Thru Fire and out of the Check Him Out mare Look Her Over.

The 2019 champion aged stallion is Admiral Sting, who won three of seven starts  each win a stakes  and earned $118,939. He is by Apollitical Jess and out of the Strawfly Special mare Sting Scorpion Sting. Bred and raced by Jahree Standridge, Admiral Sting was trained by Eddie Willis and Kasey Willis, and ridden by Jimmy Brooks. Admiral Sting won the Two Rivers Stakes (G3), Mr Jet Moore Stakes (G2) and Mighty Deck Three Stakes (G3).

Another Apollitical Jess offspring, As And Js, is the champion aged mare. Racing at three tracks across the country, the daughter of Apollitical Jess out of the Tres Seis mare Adolph Tres Knockout won one of five starts and placed twice, earning $127,292. She won the Junos Request Stakes (G2), was second in the Mildred N. Vessels Memorial Handicap (G1) and fifth in the Champion of Champions (G1). Bred by Five Puig Racing LLC, she is owned by Leonardo Alcala, trained by Alcala and Monty Arrossa, and ridden by Agustin Silva, Jose Nicasio and Edwuin Lujan.

In an unprecedented occurrence, all three of 2018's champion 2-year-olds returned to earn honors as champion 3-year-olds in 2019. The nod for overall 3-year-old went to the 3-year-old champion gelding, Apocalyptical Jess. Yet another progeny of Apollitical Jess, but out of the Holland Ease mare Cassandra Crest, Apocalyptical Jess won five of seven starts last year, including the Ruidoso Derby (G1) and Remington Park Oklahoma-bred Derby (RG3), earning $648,846.

He was bred by Danny Joe Miller and owned by Bill Robbins, he was trained by Trey Wood and Mike Robbins, and ridden by Tanner Thedford and Ricky Ramirez.

Flying Cowboy 123 is the champion 3-year-old colt after a year that saw him win four of seven starts, including the Texas Classic Derby (G1), and earn $401,388, which tipped him over $1 million in career earnings. By Apollitical Jess and out of the AQHA Dam of Distinction Hot Cash 123, by Takin On The Cash, Flying Cowboy 123 was bred by Carolyn Bay, is owned by Paragon Farms LLC, trained by James J. Gonzalez II and Trey Wood, and ridden by Ricky Ramirez and Tanner Thedford.

Uncle D gives his late sire, Corona Cartel, another champion, as he is the champion 2-year-old and champion 2-year-old colt. Bred by McColee Land & Livestock and owned by Cavenaugh Quarter Horses LLC, the colt is out of the First Down Dash mare Little Surfer. He was trained by Clint Crawford and ridden by Cody Smith and Ricky Ramirez. Uncle D won four and placed in two of his six races, earning $682,965. His wins include the Rainbow Futurity (G1) and All American Juvenile, as well as a runner-up placing in the Heritage Place Futurity (G1).

Champion 2-year-old gelding Trump My Record raced from March to November and won eight of 10 starts in the year, earning $791,153. The gelding was bred by Fulton Quien Sabe Ranches, is owned by Cruz E. Nava, trained by Jose Sanchez III and Arturo Davila III, and ridden by Eddie Sanchez. Trump My Record won the Harrah's Futurity (G3), Sam Houston Futurity (G2) and Texas Classic Futurity (G1). He is by freshman sire Apollitical Blood and out of the PYC Paint My Wagon mare Breck N Records.

Undefeated in all three starts, Let There Be Sound is the champion distance horse. The 2014 gelding by One Famous Eagle out of the Thoroughbred daughter of Rossini named Sakakawea, earned $104,191. He won the Cox Ranch Distance Challenge Championship (G1) and the Cox Ranch Downs at Albuquerque Distance Challenge (G3). The gelding was bred by Black Oak Farm, is owned by Louis and Corrine Howard, trained by John Stinebaugh and ridden by Gilbert Ortiz and Stormy Smith.

Had To Be Ivory repeats as the Canadian champion. The 2015 gelding by Ivory James and out of Had To Be Fandango by Hadtobenuts won three of five starts and earned $50,004, with wins in the Ontario-Bred Maturity and Picov Maturity. Also last year's Canadian champion, he races for breeders Carol and Jaime Robertson and was trained by Bryn Robertson and ridden by Tony Phillips.

Lafishingonabugsmoon set three track records at Hipodromo de las Americas in 2019 and won six of 10 starts to be named the Mexican champion. Bred and owned by Ramiro Gonzalez Ozuna, he was trained by Ruben Romo Garcia and ridden by Alejandro Gomez and Yair Daniel Baez. The winner of the Javier Rosique Palavicini Classic, Anselmo Aguilar Payan Stakes, Bank of America Hipodromo Championship Challenge and Salvador Onate Ascension Classic, was sired by Nofishinonafullmoon and out of the My Mr Special Bug mare A Special Ladybug.

Erico Braga's homebred Baby Fantastic BR and Mauro Eli Zaborowsky's Yoyo Verde BR are South American co-champions. Baby Fantastic BR won five of eight starts and earned $122,165. His wins include the Brazilian Futurity and I Triplice Coroa. He was trained by L. Levir and ridden by A.R. Lima and E.B. Melo. He is by Fantastic Corona Jr and out of the Feature Mr Jess mare Hustled. Yoyo Verde BR is a 2014 stallion by No Secrets Here and out of the Nordick Only VM BRZ mare Orly Vista, who won four of eight starts and earned $37,263. Among the races the horse trained by Samuel Sampaio and Adilson Jose Santos Macedo won was the Brazilian Champion of Champions.

Earning his first champion breeder title is Dr. Steve D. Burns, who topped the breeder category with earnings of $3,241,760 and an 18% win rate. On the strength of their Grade 1 siblings Runforyourlife and Powerful Favorite, Rosenthal Ranch LLC is the champion owner, with earnings of $1,064,854 and a 38% win rate. The trainer of Rosenthal Ranch's Grade 1 horses is Christopher G. O'Dell, who earns his first nod as the Blane Schvaneveldt champion trainer, with earnings of $2,105,020. The champion jockey is James A. Flores, who topped all riders with an outstanding year and $4,068,492 in earnings.