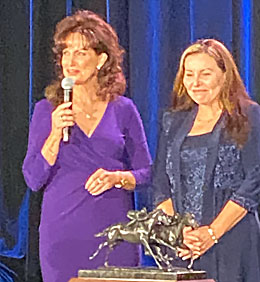 Often referred to as "the voice of Quarter Horse racing," after 40 years of service, famous racetrack announcer Ed Burgart stepped away from the microphone in December.

Burgart was not only the voice that brought life to thousands of American Quarter Horse performances at Los Alamitos Race Course, he is also a respected handicapper.

For many years, he was a columnist for the Quarter Racing Journal, and he made morning-line odds and handicapping comments for the Los Alamitos races. He also conducted numerous seminars and hosted and emceed countless industry events.

Mildred N. Vessels Special Achievement winner Melodie Knuchell is another longtime employee of Los Alamitos, having officially worked there for 30 years. In addition to her positions at Los Alamitos, she is also a racehorse owner; among other horses, she was one of the members of The Girls partnership that owned champion Old Habits.

Dr. Leonard Blach is a Colorado native who settled in New Mexico, and changed Quarter Horse racing. The recipient of the Gordon Crone Special Achievement Award is a pioneer in reproductive veterinary care, having been on the leading edge of research into products and procedures that are now commonplace  from the development and use of the medication Regu-Mate to embryo transfer.

He managed great stallions Go Man Go, Easy Jet, St. Bar and Dean Miracle, among many others. As an owner, he raced in partnership champion Time For A Cigar, and won the 2009 Kentucky Derby as a part owner of Mine That Bird (TB). He also served on the New Mexico Racing Commission for several years, and currently serves as an advisor on the All American Ruidoso Downs Foundation board.