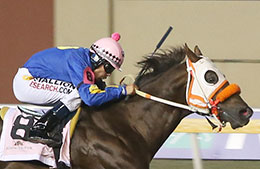 Five Remington Park Stakes Winners This Season On Invitation List For Grade 1 Debbie Schauf Champion
OKLAHOMA CITY, OKMAY 24, 2020The Grade 1, $210,000 Debbie Schauf Remington Park Championship on the final day of the season, Saturday, May 30, may turn out to be the most competitive stakes race of the meet.

Of the 14 horses nominated for this race at 440 yards, five have won stakes races at Remington Park this season and another is the 2018 All American Futurity winner. Among the rest of the nominees, five missed winning a stakes race here by less than a length.

The five stakes winners this season are Eagles Fly Higher, who has twice been to the winners circle in stakes events at Remington Park in 2020  the $50,000 Eastex Stakes on March 21 and the $84,000 Sooner State Stakes on April 18 when he upset Apocalyptical Jess.

That horse won the richest race in American Quarter Horse racing in 2018 at Ruidoso Downs, N.M. in the All American Futurity. Apocalyptical Jess was the 7-5 betting favorite in the Sooner State Stakes and ran eighth after not breaking well and never getting into stride.

Eagles Fly Higher won the Sooner State Stakes impressively by two lengths at 4-1 odds. Eagles Fly Higher is a 4-year-old colt by One Famous Eagle, out of the First Down Dash mare Lone Bet. He is trained by Casey Black, owned by Darling Farms of Lamont, Okla., and has been ridden to victory in both stakes here by Mario Delgado. Eagles Fly Higher comes in at $390,660 earned.

Apocalyptical Jess would be, by far, the top money earner in the field if he goes at $2,204,150 in his bankroll. Jockey Ricky Ramirez has ridden him in both starts here this year for owner Bill Robbins and trainer Blane Wood. He is a 4-year-old gelded son of Apollitical Jess, out of the Holland Ease mare Cassandra Crest.

Apollitical Pence was a winner in the $68,000 Mighty Deck Stakes on March 6. He also won the $368,000 Heritage Place Derby last year at Remington Park. The 4-year-old gelded son of Apollitical Jess, out of the Tres Seis mare Send City, has bankrolled $660,105 in his career.

Dexxter, a 4-year-old gelding by Corona Cartel, out of the Tres Seis mare Tres of Linda, is owned by Dunn Ranch and Valeriano Racing Stables and trained by Monty Arrossa. Leading rider James Flores was, on his way to his third jockeys title in a row at Remington Park, was aboard Dexxter for his only start at Remington this year, a win in the $68,000 Leo Stakes on May 2. Dexxter has earned $279,272 after 16 starts.

Mi Amor Secreto also won a stakes here, taking the $72,000 Bank of America Remington Park Challenge on March 29 and losing to Dexxter as the 8-5 favorite his next out in the Leo. He is a 5-year-old gelding by The Louisiana Cartel, out of the Feature Mr Jess mare Streakin in Secret. His regular rider is Jose Alvarez. He is trained by Marcos Carrizales and owned by Kelly Perez. His earnings are $478,855.

Shockinglyfamous rounds out the five stakes winners that could go head-to-head. He captured the $50,000 SLM Big Daddy Stakes on March 14. However, he was soundly defeated by Dexxter, running 10th in the Leo, but had plenty of trouble in that spot, breaking in and then bolting to the rail.

Shockinglyfamous is a 4-year-old colt by One Famous Eagle, out of the Langfuhr (TB) mare Shocktime. He is owned by Stone Chase Stables and Alexia Willis, trained by Kasey Willis and ridden by Agustin Silva. Shockinglyfamous has earned $145,549.

The other horses that were invited that have all been beaten by less than a length in stakes races here this meet are Danjer, EOS a Political Win, Fenian Faith, Hot Dam Bam a Lam and Valiant Tiberias.

Racing is scheduled to continue with Sundays 11-race card and then the week will conclude with a special Memorial Day card of 11 on Monday evening which includes the Jack Brooks Stakes, the Boyd Morris Memorial and the FL Lady Bug Stakes. First race post time is 6 p.m.-Central both nights.