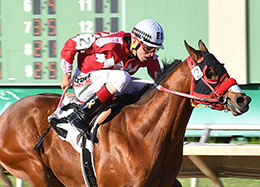 Trainer Jose Sanchez III and owners Gilbert Pachecho III and Crown Horse Racing, LLC had filed the petition after Trump My Record, who had passed a hair test prior to the trials and then also passed blood and urine tests after he set the fastest qualifying time in the May 10th trials, failed a subsequent hair test where the prohibited substance Albuterol was found.

Macs Lady M, a 3-yaer-old daughter of leading sire Favorite Cartel and the 11th fastest qualifer in the May 10 trials, was allowed to enter for the Heritage Derby on Wednesday. A maiden from seven career starts, the California-bred filly finished fifth in Trump My Record's trial behind Uncle Eds Idea, Mr Dillard and A Painted Dynasty.

She is not expected to race in Saturday's final due to an injury but was entered to be eligible to receive the 10th place check.

Trump My Record, a son of a leading second-crop sire Apollitical Blood, has won nine of 11 career starts and banked $796,937.

In his 3-year-old debut, the Heritage Derby trials, he broke dead last trailed the field for the first half of the 400-yard race before he altered his path, under champion jockey James Flores, to win the race and post the fastest qualifying time.