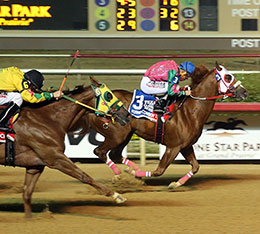 "The six horse (Fm Cartel Rock) outbroke us and probably had me by a half-length," said winning rider Ricky Ramirez. "I felt a little pressure as I wanted him to win his last race, but this horse loves to go 440 yards, so once he kicked clear, I knew we had it. He's just an awesome colt and I look forward to riding his babies in the future!

"Ricky got him going and it was over from there," stated trainer J.J. Gonzalez. "It just proves that cowboys love to fly!"

Bred by Carolyn Bay, from the world champion producing Takin On The Cash mare Hot Cash 123, Flying Cowboy 123 won the 2019 Texas Classic Futurity(G1), was second in the in the Rainbow Futurity(G1)and third in the All American Derby(G1).

It was a proud moment for Tom Lipar of Paragon Farms, who was in the winner's circle last year when Cowboy 123 won the Texas Classic Futurity.

"He's just the third horse to win both the Texas Classic Futurity and Derby (Mr Jess Perry and Pyc Paint Your Wagon were previous champions), said Lipar. "As soon as I saw his head in front, I knew he had it; he's a hell of a horse!"

The Texas Classic Derby was Flying Cowboy 123's final start. He will begin his stallion career in 2020 at Bob Moore Farms in Norman, Oklahoma.

Philip Stewart, farm manager of Bob Moore Farms was on hand and made the announcement about the 2020 stud fee for Flying Cowboy 123.

"We thank Paragon Farms for sending Flying Cowboy 123 to Bob Moore Farms," said Stewart. "Everybody's been asking, so we have set his stud fee at $5,500. We've got a long list, so if you're interested, better call quick."

Fm Cartel Rock, conditioned by trainer Robi Meche, ran the biggest race of his career to finish second, earning $75,806. Raul Ramirez, Jr. had the riding call aboard the One Sweet Jess colt for owner Jose Fabian Hernandez. Bred in California by Steve D. Burns, FM Cartel Rock is out of the Corona Cartel mare Remember The Cartel. He has earned $111,092.

Viva Le Don was another half-a-length back to finish third for owner Rocking J Running Horses and trainer Tammy Kay Johnson. Cody Smith rode the son of Rock Solid Jess out of Viva Arriba by Pyc Paint Your Wagon. Bred by Jack Manning and Tammy Johnson, Viva Le Don picked up $37,903 to boost his bankroll to $244,644. The brown gelding won last year's Black Gold 350 Championship Futurity and was second din the Grade 3 Dash For Cash Derby in October.