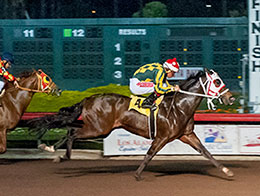 Favoriteladymelania Has Successful Prep For Maiden Stakes; Special Jb Sizzles In 300-Yard Win
LOS ALAMITOS, CAJANUARY 11, 2020Parsons Ranchs Favoriteladymelania had a perfect preparatory race for the trials to the Los Alamitos Maiden Stakes following her one length victory in Fridays maiden event for 3-year-olds at 330 yards.

Ridden by Eduardo Nicasio for trainer Chris ODell, Favoriteladymelania covered the distance in :16.977, which helped her secure her first victory in six career starts. This was her third in-the-money finish during this span.

Earlier this season she finished fourth in a trial to the Governors Cup Futurity that also featured Cesar Nunezs Pitbull, who was the eventual winner of that final. Favoriteladymelania is a brown filly by Favorite Cartel and out of Another Wise Lady. Shes a half-sister to 2018 La Primera Del Año Derby winner A Political Lady.

Felix Gonzalezs Kates First Down and Thomas Bradburys Eyell Be Back, the second and fourth place finishers in this race, were also preparing for the Maiden Stakes trials, which will be held here on Sunday, January 26. The Los Alamitos Maiden Stakes final will be held on Sunday, February 16. Horses are eligible for the trials if they are maidens as of December 1st of their 2-year-old racing campaign.

Omar Sandovals Special JB, a gelding by Pyc Paint Your Wagon, posted the fastest 300-yard time of the young season after winning the eighth race on Saturday in a time of :15.393. It was Special JBs third career, all of them coming in his last six starts. Armando Viramontes piloted Special JB for his father Rodolfo Viramontes, who has trained the Oklahoma-bred to all three of his victories.

Viramontes is among the talented young pilots currently plying their trade at Los Alamitos. He has already won 12 races from 113 mounts with his average win odds coming in at $12.10. Viramontes joins the likes of Oscar Andrade, Jr., Ruben Castro and Armando Cervantes as stars of the future at Los Alamitos.