Yanque Wins Barbra B Handicap To Make It Three In A Row At 550 Yards
Yanque, under jockey Ruben Lozano, defeating Ballast Point in the Barbara B Handicap Sunday night at Los Alamitos Race Course. 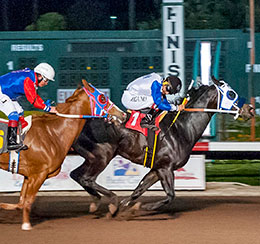 Yanque Wins Barbra B Handicap To Make It Three In A Row At 550 Yards
LOS ALAMITOS, CAJANUARY 12, 2020Martha Wells Yanque scored his third consecutive stakes win at the 550-yard distance after holding off the game Ballast Point by a half-length in the Barbra B Handicap on Sunday at Los Alamitos.

Prior to winning the Barbra B, Yanque showed his love for this distance by winning both the Scott Lewis Handicap and Paul Ford Handicap.

Ridden by Ruben Lozano for trainer Matt Fales, the son of Favorite Cartel was fifth at the start from post number one, but found a higher gear in the second half of the Barbra B. Yanque and Ballast Point hooked up for the next 200 yards before Wells 5-year-old homebred powered his way to the finish line.

He did not break as sharply as in his previous races, Lozano said. (Ballast Point) gave us a great fight. He made us battle. At the end, Yanque closed nicely. Hes a lot of horse. I kept looking at Ballast Point, but I felt we had it late. He was beating us early on, but we got him at the end. 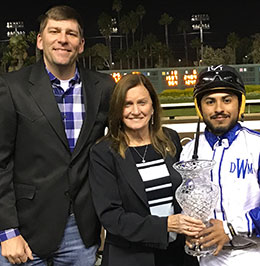 Owner-breeder Martha Wells accepts the Barbara B Handicap stakes trophy with trainer Matthew Fales and jockey Ruben Lozano on Sunday night at Los Alamitos Race Course. © Scott Martinez
Yanque covered the distance in a hand time of :26.70. This was his eighth win in 31 starts and his career earnings now stand at $157,461. Racing for Paul Jones and Thompson Racing Inc., Ballast Point took his career earnings to $36,990 for his runner-up effort.

Paul Jones is not going to let a stakes race go by and not be a contender, Fales said. We knew we had our work cut out for us with Ballast Point. Yanque relished the challenge tonight and I just couldnt be prouder of him. The reason we decided to go 550 with him is because he can afford a small error and he can still make us the ground. At 400 yards you just cant. Going back to the drawing board well need to correct that as future races for him will be a quarter of a mile. Hell definitely need to breaker better than that to be a contender.

CM Once Ina Blue Moon and A Mere Icon completed the field. Chicks Fayvorite was scratched.