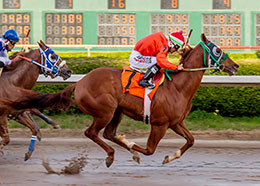 Patriot On Ice Wins Division 1 of $25,000 Billy Montgomery Stakes at Louisiana Downs
BOSSIER CITY, LAJANUARY 18, 2020Rain and a muddy track surface did not derail two excellent victories by Patriot On Ice and Runaway Second Down (see related story), winners of their divisions of the $25,000 Billy Montgomery Stakes Saturday afternoon at Harrah's Louisiana Downs.

Due to the number of nominations for the 350-yard stakes, two fields were drawn, and both were highly competitive.

Rogelio Marquez, Jr.'s Patriot On Ice scored the upset in the first heat, which was run as the sixth race on the card. With leading Louisiana Downs jockey Ricardo Hernandez, Jr., in the irons, the son of Jet Black Patriot out of the Azoom mare Zoomin on Ice, broke alertly, dueling with Strut for Petes Sake, and prevailing by ¾ of a length. His final time, over a muddy track, was :17.301 seconds, which earned him a 104 speed index.

Bred by Jordan Michael Bertrand and trained by Alberto Solis, Patriot On Ice hit the board in each of his four races in 2019. He ran third in the $305,296 Mardi Gras Futurity here last March, competing in trials for the LQHBA Breeders' Futurity as well as the LQHBA Louisiana Million. 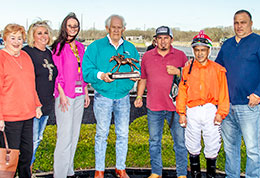 The winning connections of Patriot On Ice accept the Billy Montgomery Stakes trophy Saturday afternoon at Louisiana Downs. © Hodges Photography / Ann Switalski
This was the first stakes victory for the sorrel gelding, who was a $7,000 LQHBA Yearling Sale purchase by 2018 LQHBA leading owner Rogelio Marquez, Jr.

"He's one of those horses that you fall in love with right from the beginning," said Marquez. "We knew he was the real deal when he ran third in the Mardi Gras Futurity. I think he would have qualified for the LQHBA Million, but it was his first time racing under the lights. We have a sound horse and are looking forward to a good 3-year-old season."

Sent off at odds of 8.4-1, Patriot On Ice rewarded his supporters with a $19.60 win payout and has three wins from five starts and earnings of $58,330. Marquez said he will be pointed to the Mardi Gras Derby at Louisiana Downs and then to Delta Downs.

About Harrah's Louisiana Downs
Located near Shreveport in Bossier City, Louisiana, Louisiana Downs opened in 1974 and was purchased by Caesars Entertainment in December 2002. With annual Thoroughbred and Quarter Horse racing seasons, the track is committed to presenting the highest quality racing programs paired with its 150,000-square foot entertainment complex offering casino gambling, dining and plasma screen televisions for sports and simulcast racing.