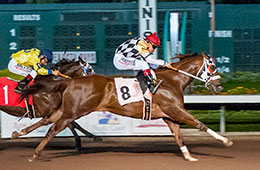 As many remarkable Quarter Horses that Dr. Burns breeds, he also campaigns many outstanding Quarter Horses as well, as shown by You Can Run and Sass Go Blue in the trials to the Grade 1, $190,550 Los Alamitos Winter Derby on Saturday night.

Ridden by Jesus Rios Ayala for trainer Mike Casselman, You Can Run flew out of the gate from the outside post number eight and never looked back on the way to posting a ¾ length victory and the fastest qualifying time of the night. The gelding by Favorite Cartel covered the 400 yards in :19.768 while winning for the third time in six career starts.

Hell now headline an outstanding group of 10 sophomores in the first Grade 1 derby of the year on Saturday, February 8. Owned in partnership with Jose Flores, 2019 PCQHRA Breeders Futurity (G2) winner Sass Go Blue also advanced to the Winter Derby final after clocking in with the ninth fastest time of :20.014. 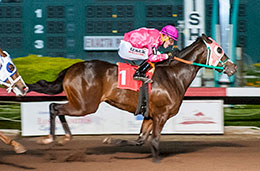 Champion 2-Year-Old Filly Cartel Jess Rockin posted the second fastest time in the Winter Derby trials.
© Scott Martinez
Bred by Dr. Burns, You Can Run is out of the Walk Thru Fire mare You Can Fly. The sorrel gelding won his trial convincingly, but he was far from perfect as he lugged in badly throughout the race.

Hes a little green I think, Casselman said. Ayala said he went in because there was no one there. He broke better than he has before. He said that he was wanting to get in the whole way until he saw another horse. Then he kind of lined up. Im really fortunate to get nice horses to train. Weve been blessed.

You Can Run entered these trials after finishing second in the $30,000 Los Alamitos Juvenile Invitational on December 15.

Ron Hartleys Cartel Jess Rockin, who was named the champion 2-year-old filly on Wednesday, was superb in her sophomore debut, as she flew out of the gate from post number one and cruised to a ¾ length win with jockey Juan Pablo Leon aboard. Cartel Jess Rockin covered the distance in :19.826 to give her the second fastest qualifying time.

Circle City (#7) and Zoom On Jess (#5) qualified in the opening trial. © Scott Martinez
John Cooper saddled the daughter of Favorite Cartel who was coming into this race after winning the Grade 1 Los Alamitos Two Million Futurity. She was a 20-1 longshot in the Two Million, but she proved that she was a deserving 2-1 favorite in the trials following her impressive win.

Shes figured things out, Cooper said. The key is to keep her sound. It was a thrill to see her be named a champion. I was thrilled for Ron Hartley. Hes fighting an illness right now so Im hoping this win does a lot of good for him.

I thought I only had six champions, but my wife, Carol, reminded me that some of them won multiple titles, he added. I had never thought of it that way until now. 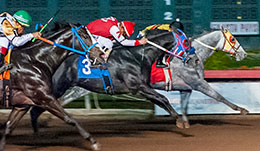 Jess Be Right (#1) pulls Mental Error (#3) and Sass Go Blue(#7) into the final in the third trial Saturday.
© Scott Martinez
Cartel Jess Rockin will begin her quest to win the title of champion 3-year-old filly when she faces a great cast of horses in the Winter Derby final. Shes won four of 10 career starts.

Nomadic, who is Circle Citys full brother, will also represent Allred and Willoughby in the final after qualifying with the 10th fastest time after running third to You Can Fly in the final trial. Circle City, by Favorite Cartel out of the stakes winning mare Moonlight Corona, won his trial by ¾ lengths, while Just Be Real, by Walk Thru Fire out of Realistically, outdueled Robert Adair Kindergarten Futurity runner-up Mental Error by a head.

Circle City needed that race, Allred said. He had not run for a long time (since finishing in the Golden State Million Futurity on November 3). I dont know which of the two brothers is better. Theyre both premier horses. Just Be Real just doesnt leave there very well. He didnt leave very well today. Hes going to be a very nice horse.